The NRL is set to investigate an alleged incident involving NSW captain James Tedesco and a 20-year-old woman after she claimed the Roosters star yelled “squid games” at her – a reference to the popular Korean Netflix series – outside Beach Road Hotel in Bondi last week.

Tiffany Trinh, who is of Vietnamese descent, told the Herald she is in the process of launching a formal complaint to the NRL over the incident, which she felt was a “joke about her race”.

The Roosters have completed their own investigation into the matter and say they believe the incident was simply a matter of miscommunication.

The club and Tedesco claim he was simply discussing the popular show with his teammates while in close proximity to Trinh.

Roosters chief executive Joe Kelly said the club became aware of the allegation when Trinh’s sister posted about the incident on Instagram on Friday.

“There was absolutely no interaction between James Tedesco with this group of people. We categorically deny that anything untoward occurred.” 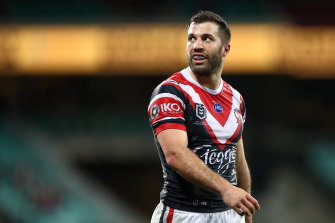 ‘Nothing untoward’: The Roosters say the incident involving James Tedesco was a matter of miscommunication.Credit:Getty Images

Trinh claims Tedesco approached while she was outside the hotel with a friend waiting for a lift home early on Thursday morning and said “squid games” to her before laughing with his group.

Trinh claimed she stood behind her friend who challenged Tedesco about the comment, before the Roosters captain allegedly laughed and asked the women whether they knew who he was.

“It was a group of about ten footy boys, and I was pretty intimidated. It felt pretty bad being laughed at,” Trinh said. “A 20-year-old tiny girl, waiting for a lift home and you have a bunch of guys come up to you and laugh at you for being Asian.

“It was definitely him, no doubt, and the comment was undeniably directed at me, the intent was clear.”

Trinh said she originally laughed off the incident and shared the story with friends and her sister, who encouraged her to take the incident more seriously.

“All the fans idolise him, have posters of him. You can’t just let that slide,” she said.

The NRL said its integrity unit investigates all complaints which are reported to the governing body. Trinh confirmed on Sunday an NRL official had made contact with her to arrange a discussion.

“He’s saying things – drunk or not – to girls who are half his height, half his weight. We are not here to take him down. We are just calling him out for it,” Trinh said.

“I just want the incident to be acknowledged, and for him to be held accountable for his words and actions.”

Tedesco was named the NRL captain of the year at the Dally M awards last month.