There were farcical scenes at the NRL Nines on Saturday afternoon as Penrith were robbed of a semi-final berth by a refereeing howler.

The Panthers were defending their line with a 14-13 lead in hand over the Dragons in the final seconds of the second quarter-final when Ben Hunt kicked cross-field to unknown rookie Cody Ramsey. 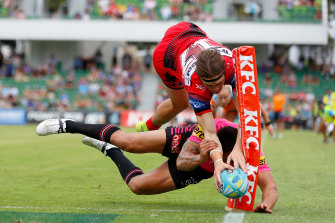 Cody Ramsey crosses for the hotly disputed try against Penrith on Saturday.Credit:Getty

Ramsey, who had already nabbed a double on his 20th birthday, produced an acrobatic finish to soar high and ground the ball.

It was the last thing Cummins needed after being at the centre of the "six-again" furore in last year's grand final.

Penrith should have been facing Parramatta in the semi-final, not the Dragons.

Farcical scenes ensued as Penrith players and officials gestured towards the big screen but because the Nines do not have the NRL bunker in operation to try to ensure the pace of play is as fast as possible, there was nothing more the Panthers nor officials could do.

Nathan Cleary admitted the coaching staff, in particular, were "pretty filthy" but otherwise provided a diplomatic response to the drama.

"(The coaches) were pretty filthy straight after but it's a pre-season tournament. We have to forget about it now. There is no point dwelling on it," Cleary said.

"It sucks. Losing always sucks but losing like that kind of hurts a bit more.

NRL head of football Graham Annesley addressed the blunder on the television broadcast soon after.

"Very disappointed obviously, you only had to look at the reply to realise that it wasn't a try," Annesley said.

"The officials got it wrong and that's disappointing.

"There's three of them out there and between the three of them they've got to come up with the right decision. At the moment I haven't dissected it – Bernard Sutton, the referees coach will do that.

"Ultimately they got the decision wrong. They should have got it right. They're only human, they make mistakes.

"This is helter-skelter football. It does demonstrate why we have video referees in the premiership proper and that's the way it is."

Annesley backed the absence of the bunker despite the blunder, pointing to the fast format as critical to the Nines' success.

"If we had a video referee in play for this type of tournament, we'd probably be finishing at 3 o'clock tomorrow morning.

"With over 100 tries, a percentage of those would probably go to the video referee, and that's not what this tournament is about. It's about continuity and fun and people being able to see back-to-back games.

"It's a different type of tournament, but that doesn't diminish in any way the fact that they got the decision wrong. But they are human and they make mistakes."

The Titans will face the Cowboys in the other semi-final.