For a rugby league season that took so long getting started, 2020 became the campaign that never seemed to end. Fittingly, after eight months of pragmatic adaptation, it ended in a kind of glorious chaos, never over until it was over. Queensland scrambled out a series win in a wild ending to a match in which they had convinced everyone but the scoreboard attendants that they were the dominant force.

Whatever else is said about them, Queensland can never be accused of rigidity. Their Premier, after a winter of locking every gate in sight, threw them open to 50,000 at Lang Park. NSW, meanwhile, flew in and out of Brisbane on a military schedule. 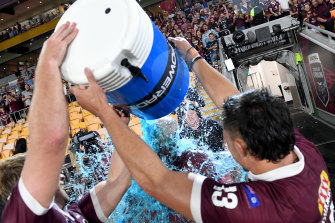 Maroons coach Wayne Bennett has an ice bucket poured on him by Tino Fa’asuamaleaui and Christian Welch.Credit:Getty

The contrast between pre-match selections told a similar story. NSW finally had the NRL’s most exciting player, Ryan Papenhuyzen, available after injury, but couldn’t see a way to fit him into their ‘system’. Queensland had a rookie of similar promise and inexperience, hooker Harry Grant, and threw him in anyway. His creativity from dummy half turned the game.

Conservatism versus adventure, machine versus man. One team striving to remember the whiteboard and join the dots of the game plan versus another team just going out and playing footy. It was ever thus. For the Blues, spontaneity comes as naturally as screaming ‘New South Welshman!’ down the tunnel.

Of the three matches in this series, this was by far the most one-sided. Ad lib football gave Queensland their first try in the opening minutes, a switch of play from Daly Cherry-Evans leading to Valentine Holmes’ balletic touchdown in the corner.

Sloppiness in Queensland’s rear gifted NSW a try against the run of play, James Tedesco getting his hand on a spilt ball, but soon it was the Blues’ captain at the centre of an incident that punished the hierarchy for their stubbornness. Tedesco was knocked out of the game by an accidental knee to the head, and instead of having a superstar-for-superstar substitution in Papenhuyzen, the Blues were left with the honest oatmeal of Clint Gutherson at fullback. Without a weapon at the back, they were never really in the game.

It was a mistake-filled Origin match, reflecting the length of the season and the absence of many top-liners from both sides. The Queensland back three of Holmes, Edrick Lee and Corey Allen probably gave up 30 points collectively, Holmes bombing three or four clear chances to score. The state that had made its name from converting every slim opportunity was now throwing them away like the spoilt heir to a hard-won fortune.

But they did have the lambent stars of the night. Josh Papalii, Felise Kaufusi, Tino Fa’asuamaleaui and Lindsay Collins were all more powerful than the best of the Blues forwards, Jake Trbojevic, who was often fighting a lone hand. Cherry-Evans conducted the tempo of play. Three minutes before half-time, Cameron Munster, the biggest attacking threat on the field, produced not one, not two, but three kicks within the space of 20 seconds, a hat-trick that not even Queensland’s outside backs could muff.

It was the insertion of Grant that hammered home NSW’s unlearnt lesson. While NSW’s X-factor languished in a training shirt, Queensland’s darted out of dummy half, caused uncertainty in the defence, made breaks both half and full, and eventually crawled over the line to put the Maroons all but out of reach.

All but. Holmes dropped what would have been the icing, not to mention the whole cake, and some more impetuosity from the Queensland back three gave the Blues an improbable sequence of last chances leading to the climatic craziness that typifies these contests.

In the final stages, waves of blue washed up against the Maroon wall. Even in the last seconds, this game, this season, refused to end. The Queenslanders were celebrating full-time on the perimeter of the field while the referee was still assessing a captain’s challenge, NSW’s last ploy when all else had failed.

As an Origin series, this one tested the patience of fans, many of whom had been worn out by the interminable season and, by November, had switched over to their favourite dramas. But for those who remained, Origin is a drama queen without parallel, whoever is wearing the jerseys. It’s a remarkable entertainment. This Queensland team was derided as the worst ever. Compared with the best ever, elected by experts on this 40th anniversary, they don’t stack up at all. Perhaps they are the worst. But they were still too good for NSW’s best.