The NRL's forced State of Origin reschedule has yielded the worst television audience since national figures became available in 2003.

Wednesday night's opening game of the series on Channel Nine attracted a national average audience of 2.38 million, down almost 25 per cent on the corresponding game last year. 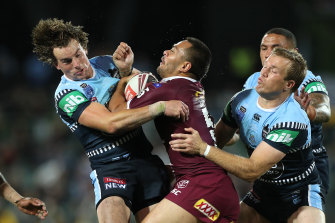 Less than 2.4 million people tuned in nationally for Queensland’s come-from-behind victory in Adelaide.Credit:Getty

Four of the past five Origin matches have failed to crack three million viewers, which prior to game three in 2018 had not happened since 2009.

The NRL had been holding off negotiations until after the Origin series in the hope of attracting large numbers, however that tactic appears to have backfired and will likely see State of Origin return to its usual winter schedule in the middle of the season.