North Melbourne say midfielder Tarryn Thomas has been charged by police with threatening to distribute an intimate image.

In a statement released on Wednesday, the Roos also said the 22-year-old was caught driving while on a suspended licence during the Christmas break. 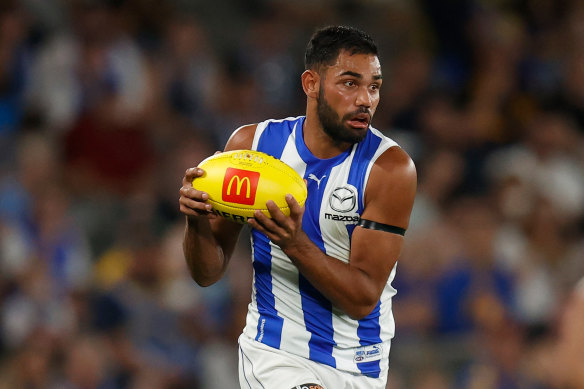 Tarryn Thomas has been charged by police.Credit:AFL Photos

Both incidents have been logged with the AFL’s integrity unit.

“Tarryn Thomas has been charged with a single count of threatening to distribute an intimate image,” the Kangaroos’ statement read.

“In addition, Thomas was stopped by police while driving with a suspended licence during the Christmas break.

“The club has informed the AFL’s integrity unit and the AFLPA on both matters and the club will continue to work with Thomas regarding behavioural expectations. North Melbourne will not make any further comment at this time.”

Thomas, who is contracted with the Roos until the end of 2024, played just 10 games last season, missing matches through injury, form and personal leave.