Home » Rugby League » No excuses for the Blues in 2020: Weitering

Carlton defender Jacob Weitering says the Blues no longer have any excuses for not moving up the ladder with the young players on the list ready to accept responsibility for the team's performance in 2020.

The Blues have not been above 10th on the ladder at any time in the four seasons since they finished bottom in 2015 and used their No.1 pick in the national draft to get Weitering to the club. 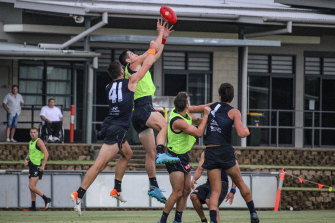 Weitering's career is "ready to get started" says back-line coach Dale Amos, with many lessons learned in his first four seasons.

"He has evolved as a player … he is still in the infancy of his career, having broken the mould a bit in his first year," Amos said.

"He has become more mature and he has a greater self awareness of his career and the things that he needs to do in terms of his preparation and working on his game and watching the opposition."

The defender is also more equipped emotionally to handle inevitable setbacks than he may have been when he first arrived as the best young player in the country.

Weitering went from a player his Richmond opponents described admirably as "almost a robot" in his debut match, when he took three contested marks and immediately looked the part, to someone playing for the Northern Blues in the VFL less than three years later.

"Initially I took it pretty hard but then realised you have to take it as a learning opportunity," Weitering said of his demotion.

The thought of playing at Frankston in front of, and against, many people he knew from his nearby hometown Mount Martha on Victoria's Mornington Peninsula wasn't great for the bright prospect.

"It is a little bit humbling, for sure," Weitering said.

He ended up enjoying the experience, regaining touch and confidence. He began winning or halving one-on-ones, taking a new attitude into the AFL in the back half of 2018 and into 2019.

He realised that a good performance did not necessarily equal Weitering being one of the best players on the ground as he had been more often than not in his junior career.

"You play mind games with yourself. You want to perform and be the best you can be but at times you have to play the role," Weitering said.

"Overthinking and comparing yourself to different players is a trap a lot of players fall into.

"At the end of the day you can only control what you can control and that is preparing the best way possible."

Jones' absence in the middle of last season – although unfortunate – allowed Weitering to take a step forward when he played well on Richmond's Tom Lynch, Geelong's Tom Hawkins and West Coast's Josh Kennedy.

Not one to make outlandish statements, it's clear Weitering can see good times ahead as he ponders the experience of former Richmond defender Alex Rance, who went from playing in 20 wins in the 66 games he played in his first four seasons to a premiership defender at the best club in the competition.

"He went through a tough time as well early but his perserverence and the way he became as a player was something to behold," Weitering said.

"The light is certainly at the end of the tunnel."