Collingwood coach Nathan Buckley isn’t certain what boxes he needs to tick to earn another term leading the Magpies, but he says new president Mark Korda is not the man who will decide his future.

Buckley went on the front foot on Thursday to state his side still aims to make the finals and that previous president Eddie McGuire never appointed him as coach, with the decision on his future resting with football general manager Graham Wright and chief executive Mark Anderson. 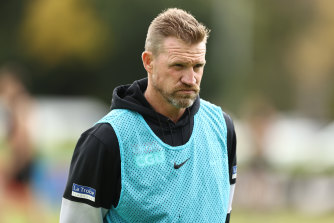 Collingwood coach Nathan Buckley, pictured during a training session at the Holden Centre, is clear that the decision on his coaching future doesn’t rest with new president Mark Korda.Credit:Getty Images

The Magpies are 1-4 and sit in 16th position heading into the annual Anzac Day blockbuster against Essendon at the MCG on Sunday.

“I won’t be sitting down with Mark about my position,” Buckley said.

“I am pretty sure Mark will be sitting down with Mark Anderson and Wrighty at some point as the board will do periodically to make sure the club is tracking in the direction that the board has set.”

But Buckley admitted he didn’t have a clear idea of what he needed to do beyond winning games and looking to “medium-term” goals in playing some younger players and setting up success in future seasons.

“We are not sitting down talking about 2022 at this point – there are different list management, long-term things where you lift your eyes,” Buckley said.

“My job is to manage the coaches and to have the players in the best shape possible to perform on the weekend.

“There are certain aspects in that but no – winning is probably the easy one and I don’t need a conversation to know that, but there is also consistency in performance and growth in our football team and we are endeavouring to do that as best we can starting on Sunday.”

Buckley said he wouldn’t give up on this season but was looking at some younger players with an eye to the future.

“If there is contending at one end and rebuilding on the other – there is plenty of different stages in between and we like to put things in nice, neat little boxes but we still believe we can do some damage this year and we are not giving up on this year,” Buckley said.

“We feel we can be, that we have the elements to come together to be a really difficult side to beat and if you do that consistently enough you will win a lot of games of footy. So that’s our intent.

“But at the same time I do believe we have enough growth in us to be considering being better over the next two or three years as well.

“We’ve come off three successive finals campaigns and we don’t want that to discontinue, we are still aiming for finals and we want to be a threat in finals, but you are always lifting your eyes and looking for better, and if that means bringing youth in or changing roles to suit the team and be looking for better, then we will do that.”

Keep up to date with the best AFL coverage in the country. Sign up here to our Real Footy newsletter delivered to your inbox on Mondays and Fridays.