John Morris has officially been told he won’t coach the Cronulla Sharks next year, paving the way for Craig Fitzgibbon to be named the club’s new boss from 2022.

Just a day after Morris met with Sharks chief executive Dino Mezzatesta in a meeting which the coach’s agent Chris Orr described as “positive and productive”, Cronulla have put an end to rampant speculation about their coach’s future. 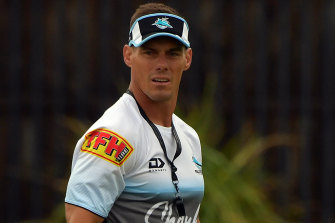 Sharks coach John Morris has been told he won’t be in charge next season.Credit:Sam Mooy/SMH

Negotiations with Fitzgibbon escalated in recent days after the Sharks initially registered their interest last Christmas. He has been given the blessing of Roosters supremo Nick Politis to chase his first NRL head coaching job.

Attention will now turn to whether Penrith assistant Cameron Ciraldo will join close friend Fitzgibbon in the Shire, with the Sharks desperate to unite the game’s two most in-demand assistants next year.

Ciraldo has told the Panthers of the Sharks’ approach, but doesn’t want to leave last year’s grand finalists on bad terms. He’s yet to make a decision on whether he will join Fitzgibbon’s staff.

The Sharks’ move comes after 72 hours of intense scrutiny of their coaching situation, with Morris telling Nine News on Monday he was still “hopeful” of earning a new contract after a 90-minute meeting with Mezzatesta.

But Cronulla’s transient roster – which has 14 players off contract at the end of this season – meant a decision needed to be made quickly. And Cronulla finally bit the bullet.

The club is still circling Melbourne super-coach Craig Bellamy as a coaching director. Bellamy has yet to make a decision on his plans for 2022, but is tipped to stay at the Storm in some capacity.

Earlier on Tuesday during a media call, captain Wade Graham urged the club to put an end to the firestorm around Morris, who has promoted a number of the club’s juniors and turned them into regular NRL players.

“The speculation is unfair on the players, on John, on the club members and the fans; ideally for everyone the sooner a decision is made the better,” he said. “The best thing moving forward would be for the club to make a decision either way as quick as possible so we can put it behind us and move on for the rest of the season.

“He has certainly done a commendable job over the last couple of years already.”

The Sharks made the finals in both 2019 and 2020 under Morris before exiting in the first week at the hands of Manly and Canberra respectively.