Western Bulldogs favourite son Dale Morris won't be returning to the club next year, one of several staff members let go by the Dogs last week.

Premiership defender Morris, 37, was appointed a development coach at the end of last year following his retirement from playing.

But he was stood down during the AFL's initial coronavirus shutdown in March and did not return to the club ahead of the season resumption in June. Assistant coaches Jordan Russell and Joel Corey were in the same boat. 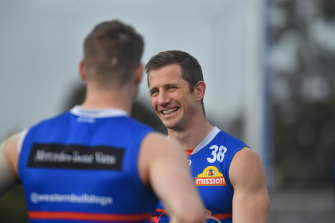 Dale Morris has been let go from the Bulldogs’ coaching staff.Credit:Joe Armao

Discussing the ongoing standowns in May, Bulldogs coach Luke Beveridge said the situation was very difficult.

"[Morris] has got a really bright future as a coach," Beveridge said.

"It's just the first step on his journey and he's constrained now, he's not able to pursue that here at the moment.

"That's probably one of the top-three most challenging days of my life, last Friday.

"I can only imagine how challenging it was [for] the young men who got that news as well.

"I'd love to think at some point in the future I can go to some of those guys and say 'we've got a position for you if you're willing to take it up', but they may have moved on by then.

"There's obviously a sadness to that and the guilt we all feel, the ones that are still in the program, and still have jobs."