Latrell Mitchell’s season is on the line after South Sydney’s superstar was embroiled in a fiery stoush with former teammate Joseph Manu over a high shot which left the Roosters gun with a suspected fractured cheekbone.

Mitchell, who was contentiously banned for four matches after a night of madness against the Wests Tigers, was sin-binned and placed on report for a tackle on Manu, in which his shoulder appeared to make contact with Manu’s head in South Sydney’s 54-12 win on Friday night.

Manu, who was Mitchell’s fellow centre during the Roosters’ back-to-back titles in 2018-19 and regularly spoke about how the two spurred each other on in training, walked from a distance to confront the Rabbitohs fullback, forcing referee Ashley Klein to douse a melee.

The tackle wasn’t immediately penalised, but the bunker advised Klein to place Mitchell on report and banish him to the sin bin.

Manu immediately left the field with a badly swollen face with fears his season is over.

Mitchell is treading a similar tightrope after landing in hot water earlier this year and any charge levelled by the match review committee on Saturday morning is likely to rule him out deep into the finals. 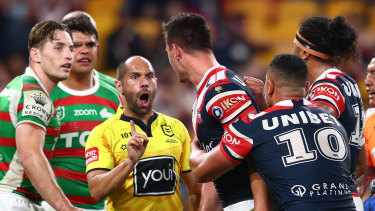 Mitchell returned to bag his second try after his sideline stint and then incited a melee when he slammed the ball down in celebration, angering Roosters players as it narrowly missed the head of rookie prop Fletcher Baker, who was left scattered on the ground.

The Mitchell-Manu confrontation was the flashpoint on a crazy night featuring the bitter rivals, with the Rabbitohs avoiding their own major injury scare after Adam Reynolds returned to the field after an earlier knee problem.

Wayne Bennett’s side delivered a crushing blow to the Roosters’ top-four hopes, ironically seizing the ascendancy while Mitchell was in the sin bin as they warm up for a likely return bout with the Panthers in the first week of the finals.

Reynolds, who broke Eric Simms’ long-standing point-scoring record for the foundation club earlier this month, didn’t even finish the first half after hyperextending his right knee during an early attacking play. 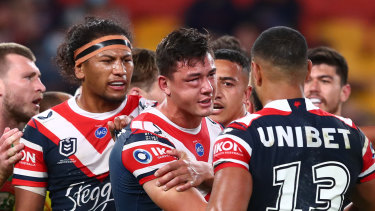 But Bennett sent an SOS to the Brisbane-bound No.7 while Mitchell was in the sin bin, triggering an immediate response as the Rabbitohs steadied in the face of a spirited Roosters.

Benji Marshall, another veteran who could be in his final days at Redfern, was given extended time as the Roosters surrendered the advantage to Manly in the race for a double chance in the finals.

Missing a staggering $6 million worth of talent, Trent Robinson’s Roosters never yielded on effort but simply couldn’t match the class of their arch enemy, who also celebrated Mark Nicholls’ first try-scoring double of his career. He crashed over twice in the space of four first-half minutes before promptly being interchanged by Bennett.

It wasn’t quite the embarrassing 60-8 final round thumping last year, and there’s no way Robinson can chide his team for this effort. And they had all the running despite being down 12 points when Mitchell was banished for his high contact before South Sydney piled on five tries in 18 minutes.

This game might make another happy chapter in South Sydney’s famed Book of Feuds, but they really should be writing a book on how Robinson has nursed this team to the brink of the top four after a calamitous season.

The coach couldn’t even name the mandatory 21 players when he released his team list on Tuesday – because he only had 20 available players. There was no point playing games, he reasoned. The cupboard was bare and everyone else ought to know.

Perhaps the only surprise as the Rabbitohs sauntered to a 24-6 half-time lead was the fact Bennett decided to load up his team’s right side attack instead of their left.

The NRL’s leading try-scorer Alex Johnston returned and needed just six minutes for his first try and the half finished with Mitchell’s lightning hands, a blink-and-you-miss-it act, helping himself to a four-pointer against his old club with the help of Jaxson Paulo.

Johnston finished with a treble, and both teams finished with 12 men after Sitili Tupouniua and Dane Gagai were sin-binned for a push and shove.

But what now for Mitchell?