Queensland flyer Meg Ward believes the 2020 Women's State of Origin clash will be a sell out at its new Sunshine Coast home and can push the case for a three- game series.

Tickets went on sale on Wednesday for June's one-off women's Origin that has been relocated to the 12,000-capacity Sunshine Coast Stadium after a successful two year run at North Sydney Oval. 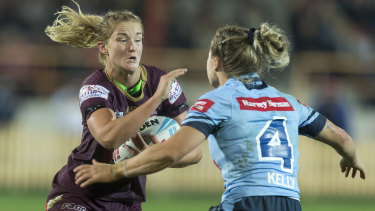 It marks the first time an official women's Origin game will be held in Queensland.

"I honestly feel we will sell it out quickly. There has been such a demand for the game to come up here the last couple of years – the fans have gotten behind us," Ward said.

And Ward hoped success this year would help fast track the creation of a three- game series, the same format used for men's Origin.

"I think it (three game series) is coming. All the feedback we are getting (from the public) about the women's game is that they want more," she said.

"People say 'There are only four (NRLW) teams and it only goes for a few a weeks and there's only one Origin'.

"People are constantly asking me 'when is the next Origin?' and when are there going to be more (NRLW) teams?'

"If we can keep putting out a good product it will be great for the future, it will only continue to grow."

After being called the Women's Interstate Challenge, the clash officially earned State of Origin status in 2018 with NSW winning the first two games in Sydney.

Ward has been a member of the first two Queensland Origin sides and admitted it had been frustrating getting just one shot at NSW each year.

She said the Maroons were still smarting after letting a 4-0 halftime lead slip and losing 14-4 last year.

"It is frustrating. I feel last year we were right there. We were winning at halftime but we had a lapse of concentration in the middle of the game and they got away from us," Ward said.

"I don't think last year's score reflected the game but I know we have learned from it and are looking forward to this year."