Home » Rugby League » Lyon to present the cup should the Dees triumph, Grant if the Bulldogs prevail

The premiership cup presentation at this year’s AFL grand final will have a distinct contemporary flavour to it, with two modern greats selected to present the trophy should their old team triumph.

Former Melbourne captain Garry Lyon will pass the coveted silverware to Simon Goodwin and Max Gawn if the Demons salute, while Luke Beveridge and Marcus Bontempelli will receive the cup from champion former Bulldogs forward Chris Grant should their team emerge victorious. 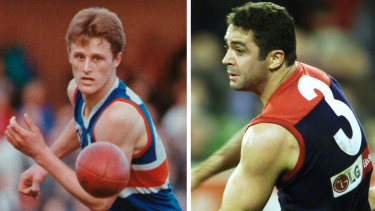 Bulldogs favourite son Chris Grant and Melbourne icon Garry Lyon have been selected as the presenters of this year’s premiership cup.Credit:The Age

Due to the strict nature of Western Australia’s border controls as a result of the pandemic, the league’s options were limited.

But, luckily, Lyon is in Perth covering the finals for Fox Footy, and Grant is travelling with the Bulldogs in his role as the club’s head of football.

Lyon earned All-Australian honours on five occasions, won two best-and-fairests, and was named in the club’s team of the century as well as its hall of fame. The star forward finished his career with 426 goals (the fourth most of any Demon) from 226 games.

Grant, also a former captain of his club, sits second on the Bulldogs’ all-time games list with 341, behind only Brad Johnson (364).

He also kicked the third-most goals in the Dogs’ history (554) and finished his 18-year career with three All-Australians, two best-and-fairests, membership in the Bulldogs’ team of the century and induction into the Australian Football Hall of Fame. Cruelly, though, he was denied the 1997 Brownlow Medal through suspension, despite finishing with the most votes.