Cameron Murray was voted by his peers as the best No. 13 in the game this week.

But the South Sydney skipper is quick to nominate Penrith counterpart and Saturday’s semi-final rival Isaah Yeo as the real Top of the Locks.

For the sake of debate, if Murray and Yeo were on the open market for about $850,000, and your club could only choose one of them to sign, who are you signing?

Most fans don’t know that Yeo could have been at Souths after his management and Redfern officials discussed him joining the club a few years ago. Yeo had issues with his shoulder and a couple of years remaining on his deal, but some at Souths only viewed him as a back-rower.

Murray, 24, and 27-year-old Yeo are the standouts in a bumper crop of NRL locks, which also includes the Sydney Roosters’ Victor Radley, Manly’s Jake Trbojevic and even Gold Coast captain Tino Fa’asuamaleaui. 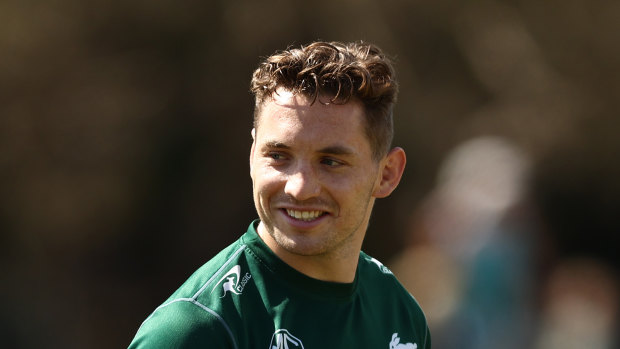 Murray, who got the nod in The Players’ Dream Team, told the Herald he was not being modest by giving top billing to Yeo.

“‘Yeoey’ is the best lock in the game by far,” Murray said.

“You can pick and choose different attributes from different locks in the game. You might get one from Victor, one from me, one from Jake and Isaah … but Yeoey has just been so consistent the past two years.

“It’s his leadership, he’s reliable, he has that direction in the middle, the link with the halves, and he’s just tough. He never gives up and is someone you want in your side.

“I’ve learned a lot from him in Origin camps, but he’s definitely still the benchmark in the competition.”

Yeo himself said his confidence levels were sky-high because of his performances on the Origin arena, as well as being part of an all-conquering Penrith team. Of the 61 NRL games Yeo has played for the Panthers the past three seasons, he has only lost five.

“I’m fortunate to be in that group of players where any player on their day can put their hand up for that title,” Yeo said.

“I’ve played in big games now, I’ve been fortunate to play Origin, and that helps your confidence, just knowing your game holds up at that level.

“Being in this side here, winning also helps with your confidence. 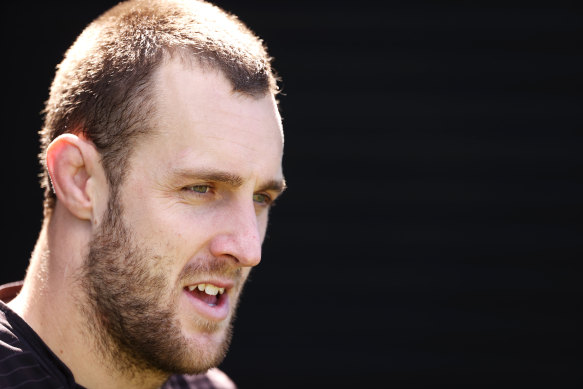 “I’m as confident as I’ve been. I feel like I’m still getting better and learning, which is only a good thing, and hopefully I can continue playing well [the next fortnight].”

Good judges will tell you they have noticed Murray with the ball in his hands a lot more this year now coach Jason Demetriou has taken over at Souths.

NSW Origin coach Brad Fittler always makes sure Yeo and Murray are among the first two picked for the Blues each year, and said of their respective strengths: “The key to what they both do is their decision-making. So many blokes can’t get that right, but they are exceptional with that.

“Cam has the quicker play-the-ball, Souths have allowed him to do more this year and given him more ball, while Yeoey has the stronger running game. 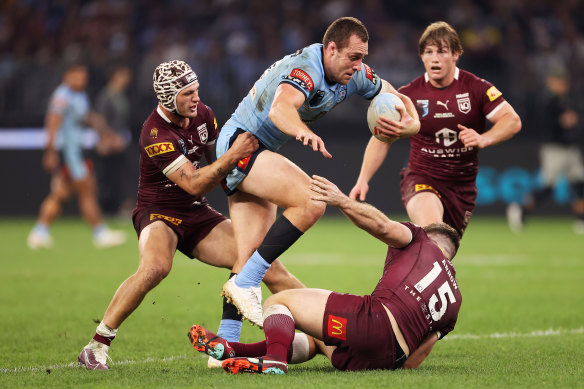 “At the end of the day they are also good people – they’re good to talk about.”

Murray showed his class last Saturday night just before half-time in the 38-12 semi-final win over the Sharks. He somehow stepped past Dale Finucane, shrugged off Teig Wilton and motored a short distance to score.

Souths teammate Jai Arrow, who wanted to be parochial and back Murray as the premier lock, said by handling the ball more, Murray allowed Cody Walker and Lachlan Ilias to do less work and therefore be more effective when they did chime in at the end of attacking sets.

Arrow quipped that fans found it easy to love Murray was because of his handsome looks, even though “I’m not sure what people see in him”.

The return of Latrell Mitchell for the back half of the year has reinvigorated Murray.

“Latrell has brought a lot of energy, and he brought it at a time when we needed it most,” Murray said.

“After the Dragons loss [in round 15] we needed something special, ‘Trell’ came back and injected a lot of energy and enthusiasm.

“When a player comes in and plays to the standard that Latrell plays at, everyone around him wants to play better as well. You don’t want to let your teammates down. You see Latrell work hard to play good footy, and it makes you want to be the best version of yourself as well.”