Ireland is calling for Roosters gun Luke Keary as he becomes the latest big-name NRL player to put his hand up for a tier-two nation at the end-of-season World Cup.

While rising star and Tricolours teammate Joseph Suaalii targets a spot in Mal Meninga’s Australian touring party, Keary is eyeing an Irish jersey thanks to his paternal grandparents.

The 30-year-old had been set to represent the fledgling rugby league nation at the 2017 World Cup until a hip injury scuppered those plans.

Keary’s call comes as several State of Origin stars have confirmed their allegiances to­­ tier two nations in recent weeks.

Josh Papalii, Brian To’o and Jarome Luai have all committed to Samoa, Felise Kaufusi will turn out for Tonga and Valentine Holmes is considering representing the Cook Islands.

“It didn’t eventuate, I had a few [injuries] at the back end of the year. We’ll just see how the next few weeks go but I’ve told the [Irish officials] that I need to tell.

“I’ve always had a connection there since I was a kid. Dad’s family is still over there. I haven’t been over there but you just feel proud whenever he talked about it. It makes me feel good thinking about it.

“It’s going to be a great World Cup with so many great players putting their hands up for their nations of birth or their heritage. I think it’s great for our game.”

Manly’s Morgan Harper and Gold Coast prop Jaimin Jolliffe are among the other NRL players eligible for the Irish Wolfhounds, who pushed Papua New Guinea for a quarter-final berth five years ago.

Suaalii, meanwhile, is also eligible to turn out for Samoa and plans on being at the World Cup one way or another. 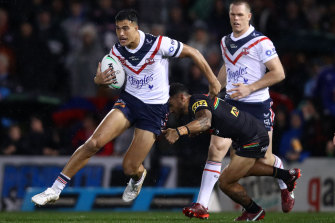 Suaalii’s impressive rise into an extended NSW Origin squad earlier this season has been followed up with form that has only gone from strength to strength since.

The 19-year-old is thriving on the added physicality of his second year of first grade, scoring four tries in his past four games and relishing heavy contact throughout the past month, as fellow teen Ezra Mam can attest after being flattened by Suaalii in the Roosters big win over Brisbane on Thursday night.

While a potential start in his preferred fullback role looms should he plump for Samoa at season’s end, Suaalii confirmed he has his sights on a green and gold call-up.

“I honestly haven’t thought about it too much but I want to be there playing at the World Cup,” Suaalii said.

“I’m trying to make that Australian team and if I’m lucky enough I’ll make that Samoan team as well.

“If I get picked for either of them it would be an honour. If I’m playing at the World Cup I’ll be happy.”