You have to wonder how much longer Cronulla officials will make John Morris wait for a contract extension.

The Sharks will not be the first team to put a cricket score on North Queensland, but the 48-10 blowout was further proof Morris clearly has an idea about this coaching caper, not to mention the full support of the playing group. 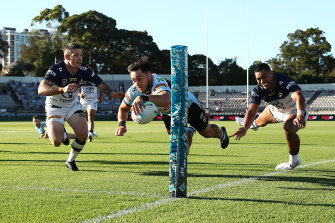 Had Chad Townsend brought his kicking boots against Canberra a fortnight ago, Morris’ men would be sitting pretty on the ladder with just one defeat.

The injury-ravaged Roosters, Newcastle and Canterbury await the Sharks in the coming weeks. On paper, they are all winnable games.

They welcome the return of Jesse Ramien from suspension next week, and Briton Nikora the following weekend.

Sharks powerbrokers have made it clear they are in no rush to thrash out a new contract for Morris, but the pressure will build with each win. 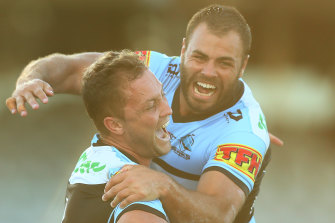 North Queensland had been dreadful the first three weeks of the competition – but they sunk to a new low against Cronulla.

They only had about 42 per cent of possession and their completions were ordinary.

While Morris eyes a new deal, Todd Payten must be wondering if he got it right rushing in to sign his own with the Townsville club.

The only person inside Netstrata Jubilee Stadium who was regretting the Sharks’ game being transferred from the Sunshine Coast because of COVID-19 was the poor ground official working the manual scoreboard.

The official was busy from the fourth minute when Mawene Hiroti crossed for the first points, and struggled to catch his breath by half-time as the Sharks led by 30 points.

The best try came just before the break when a Townsend bomb was tapped back by Matt Moylan. Blayke Brailey picked up the ball and dropped it on to his boot for a flying Connor Tracey to score.

Big Braden Hamlin-Uele sneaking a flick pass for Moylan to score was also a brilliant sight.

Townsend, Brailey, Wilton and Will Kennedy, who bagged a double, were the standouts.

Josh Dugan and Cowboys flyer Justin O’Neill departed with head knocks midway through the first half and did not return.

The Cowboys were shoved into touch deep inside their own half, came up with poor kicks, and on one occasion when Cronulla winger Ronaldo Mulitalo was hobbling around on his knee and unable to walk, the visitors bizarrely opted to remain on the side of the field.

Payten is about to lose Michael Morgan to medical retirement and already has Jason Taumalolo sidelined because of a broken hand, but is entitled to expect so much more from those pulling on the jersey each week.

The one highlight was Hamiso ‘The Hammer’ Tabuai-Fidow pouncing on a loose Townsend pass to race 80m to level the scores. But the sight of Tabuai-Fidow hardly breaking into a sweat was as good as it got.

Josh McGuire, who slammed his side for having a “soft underbelly” “and being “embarrassing” last week, was the only Cowboys forward to notch more than 100m.

The TV broadcasters will be cringing about somehow having to promote the Cowboys’ round-six clash against Canterbury and the round-14 stoush with Manly.