Geelong champion Joel Selwood will lead the club into battle for the eighth successive season after being officially named captain at the Cats’ season launch.

The Cats’ triple premiership midfielder has already served the club as skipper in a record 162 games, having taken on the position in 2012, the year after the Cats won their most recent premiership. 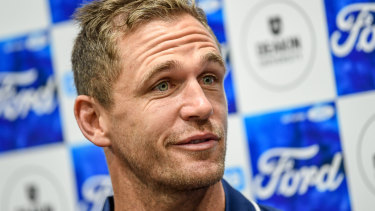 Patrick Dangerfield will again be the 30-year-old’s deputy, having been appointed vice-captain for 2019 alongside club best-and-fairest Mark Blicavs, who has been named co-vice-captain for the first time.

Dangerfield, 28, remains one of the game’s best players, having won the 2016 Brownlow Medal and being runner-up (although ineligible) in 2017. He has been All-Australian six times and was vice-captain of that team in 2018.

Blicavs won the Carji Greeves medal for a second time last year playing at full-back and was Geelong’s best player in the elimination final.

The Cats introduced running defender Tom Stewart into the leadership group after he earned All-Australian selection last season in just his second season of AFL.

‘‘Importantly, the group display the values that we should all aspire towards,’’ Lloyd said.

‘‘This group will consistently deliver and lead the group on what the Geelong Football Club stands for.

‘‘In addition to the group, we have a number of experienced and senior players that will continue working with our younger players as they forge their AFL careers.

‘‘We are fortunate to have so many strong leaders within our club and we are confident this group will deliver outstanding leadership at both a team and a club level.”

The Cats have expressed a determination to bounce back from last season’s early exit from the finals.