The most salient point made by Eddie McGuire in his lengthy Collingwood editorial during the week is that it is time for Jeff Browne to emerge from the shadows and make a genuine case for his tilt at the Collingwood presidency.

Having left the club earlier than expected, and with not even the seeds of a succession plan in place, McGuire was clearly not aware back in February of Browne’s presidential ambitions, if in fact those ambitions even existed at the time. 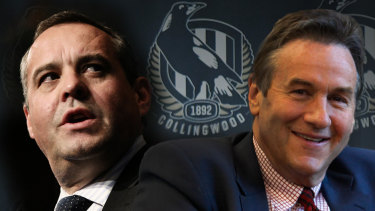 After some lengthy internal manoeuvring, in which at least two directors switched allegiances from Peter Murphy, Mark Korda was elected president in April at a time when Browne was neither fully prepared, nor had the support to come on board. With a clearer vision and better planning surely that would have been the time for him to make his move. Complicating matters for Browne was the ultimate reality that, despite their divisions, the board appeared united in not wanting the former AFL lawyer, Channel Nine boss, and McGuire close friend as president.

McGuire’s position had been taken by VRC chairman Neil Wilson. That appointment, at least, was difficult to argue with, but the seeds of discontent surrounding Korda’s leadership were fuelled by dismayed Magpie supporters and notably disgruntled aspirants who had missed board roles, such as past players president Paul Tuddenham and digital strategist Con Frantzeskos. 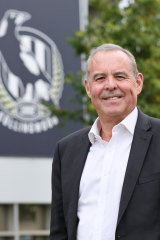 Fuelling a messy April and May was the reality of the club’s salary cap-inspired fire sale, which contributed to a lifeless team enduring a string of losses and the controversial board appointment of former road cyclist Dr Bridie O’Donnell, a former St Kilda supporter who had not been a member long enough to vote as a director. It is worth pointing out that Collingwood must have at least three female directors to qualify for Victorian Government funding to further redevelop its Olympic Park precinct facility.

Korda has dug in through all of the above, penning a letter to members in News Corp and firing off an angry media release accusing Browne and his supporters of “bullying”. Another disgruntled member, David Hatley, collected almost 2000 signatures to force an extraordinary general meeting but then backed off after Korda’s board dissuaded him.

Those signatures have now been taken over by Frantzeskos but the push for an EGM has been complicated by the board’s refusal to share the identities of Collingwood’s eligible voting members, which reportedly number 12,000 out of the Magpies’ total 80,000 members. Without those names, the Browne campaign has no hope. Hence the move by Francis Galbally to report the board to the Australian Securities and Investments Commission.

Along the way came the decision to part company mid-season with Nathan Buckley, a move that seemed politically-timed and gave the board the authority to openly search for a new coach. At least one coaching aspirant has said he would want to have Browne’s imprimatur before taking on the job and two frontrunners, Brad Scott and Don Pyke, are managed by Craig Kelly, who has publicly supported Browne. As has Peter Moore who, like Kelly, has a son playing at the club.

As much as he wants to remain at a respectful distance from all of the above, Browne cannot. In the past he has done his best work away from the spotlight, but now is the time to put up his hand and step forward, even if that risks a loss of face. As Korda digs in, Browne’s only hope is to demonstrate strong leadership and a detailed vision for a football club at the crossroads.

The EGM push might not have been organised by him, but his camp is clearly all over it now and in tandem with Galbally. Browne has clearly been working strategically and diligently to put together a ticket that has proved challenging and time-consuming.

One potential candidate, Luke Ball, was subsequently approached by the club to work on the internal sub-committee searching for Buckley’s replacement. That ticket also remains in the shadows, which is not surprising when you think back to the ridiculed public launch in 2016 of the Richmond challengers ‘Focus On Football’.

So, the names of Browne supporters who would help form his assault should that EGM go ahead remain unclear. As is whether Tuddenham or Frantzeskos are part of that ticket, although there are other candidates on-board who would not want to be associated right now with a process and a club that McGuire described on Footy Classified as an “embarrassment” and “a laughing stock”.

The only other option open to Browne is to stand at the end of the season for one of the three vacant board positions. The gender requirements would demand he stand against the only male director up for election, Murphy. Christine Holgate and O’Donnell are also up for election and the expectations are that Browne would stand along with two women who are part of his mystery wider ticket.

The prospect of Browne and Korda operating on the same board is unthinkable, but something for the board to sort out should it eventuate. In the meantime Browne needs to stand up and outline his vision for Collingwood. 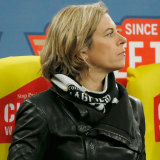 To date, all Magpies supporters have seen is a News Corp interview declaring his ambition for the presidency, followed by an interview in The Age in which he rejected director Jodie Sizer’s allegation that he came from a position of power and privilege, supported football boss Graham Wright, and did not rule out a challenge ticket including both Kelly and Moore.

In Browne’s most recent public strategic move he listed the not insignificant mistakes made by the club in recent years, which included the total player payments debacle, a debacle he laid at the feet of Korda. He has also hit back at the bullying claims.

But the clear impression is that Browne is plotting behind the scenes, and frankly relying upon the wrong people to do his bidding. Whether his campaign is losing momentum as Collingwood search for a new coach and the football COVID caravan moves on is less relevant than the fact that Browne is a candidate without a crusade, a challenger without a game plan. And that he is hiding behind a group of disorganised and disgruntled former supporters, and some albeit influential but disenchanted former players.

As cliched as this might sound, it is time for Jeff Browne to stand up and be counted. Or call the whole thing off.