This is an important weekend for a lot of players. With NSW positions on the line, it’s the last chance to impress Blues coach Brad Fittler for game two in Perth on June 23. So, this is a big game, in particular, for Raiders five-eighth Jack Wighton. 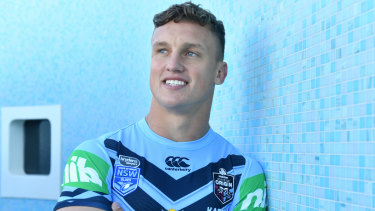 Jack Wighton … The Canberra five-eighth could give NSW coach Brad Fittler something to think about with a big performance against Cronulla.Credit:AAP

WIGHTON ON THE MONEY

Wighton was strong in Origin I when he came off the bench. I know he threw that intercept pass for Dane Gagai but it shows he has the balls to try something. He’d be disappointed in that play, but he was prepared to change the momentum when he came on. He rolled the dice. It just didn’t come off that time. Next time it will.

He’s a big, strong five-eighth, which I like. Strong, aggressive defender. He was one of the hardest trainers for the Blues in camp for game one. When the team did some boxing at Woolloomooloo PCYC, he was frightening. His kicking game is also very important to the Raiders. The Sharks will struggle to contain him.

The Viking Clap will be heard all over the ACT tonight — and hopefully it will generate some heat in GIO Stadium because the weather forecast is for zero degrees. That will suit the English players in Ricky Stuart’s team. That brings them into play because they’ll think they’re back in the north of England.

I’m not entirely sure what “Stick” did over the off-season, but he said after last Friday night’s 28-0 win over the Wests Tigers that defence was something they had really worked on. You can tell. There’s been a noticeable shift in attitude.

In the past, Canberra have been the sort of team that would race out to an 18-0 lead but then let the opposition back in before winning — or losing — by a handful of points.

But they’ve found some steel. I suspect it’s got something to do with the English players in their side — Josh Hodgson, Elliott Whitehead, Ryan Sutton and John Bateman. I’ve never met a soft Pommy forward. They’re all tough as nails. And that is something picked up by the younger players. They have, as a consequence, a really hard-working, mobile pack.

The knock on the Raiders is that Hodgson is still out with that broken thumb. That changes their attack. His replacement, Siliva Havili, is incredibly powerful. He’s been hit by an elevator: all squashed up. He’s wider than he is tall. Really, he should be six foot three. But he’s been squashed into five foot 10. Watch him close to the line, getting down low and out of the dummy half, trying to burrow through.

Both teams have a lot of skill on the edges. That’s the match-up I’m looking forward to the most.

Bateman and Whitehead are prepared to pass and kick. I’ve seen both of them kick. Most coaches would cut their backrower’s foot off. Ricky’s encouraged it.

The Sharks’ left side, with Wade Graham coming back from injury, is lethal. When Wade made his return from a long layoff last Saturday against Parramatta, he was glowing. He looks so fit and healthy. The combination of Wade and centre Bronson Xerri is dangerous. On the other side, they have Briton Nikora, who also possesses a lot of skill.

Sharks coach John Morris is about to have a massive headache — although it’s not a bad one to have.

With so many big-name players out with injury at the start of the season, you would’ve thought Cronulla would struggle. Instead, the younger guys have provided so much for him.

What does he do with Kyle Flanagan with Shaun Johnson about to come back? He’s been a  steady influence because he’s an out-and-out halfback. He is not a five-eighth. He’s a game-managing No.7.

The Roosters are said to be sniffing around him before the June 30 deadline. He’d be a good buy, even though I'm not sure how he'd fit into that team with Luke Keary and Cooper Cronk there.

I’ve spoken to Kyle and he’s an ambitious young bloke. Now he’s starting in first grade, he doesn’t want to go back. He’s got two years to go on his current Sharks deal. Is he willing to bide his time and miss out on 30 first-grade games?

Johnson has been named on an extended bench for this match and, if he does play, he should start on the bench. You can’t put him straight back in there because Kyle has been so effective.

Sharks prop Matt Prior is the forgotten man of Origin. There’s a position up for grabs for NSW with David Klemmer, who was so damaging in game one, ruled out with a fractured wrist. We need that “play one” front-rower: the first person to go-forward.

We were also down on those real effort areas in game — like chasing the kicker, speed of the defensive line — compared to last year. Prior is a player who doesn’t stop.

An Origin jumper is on the line for him tonight.

Everyone is talking about the Roosters, Souths and Storm as the premiership favourites. But these two teams are the dark horses. They are the only ones, that I can see, coming out of the pack.

Compare both teams at full strength and I’d lean towards the Sharks later in the year but there will be some points scored in this one and that’s why I like the Raiders — but only just.