Tough Storm playmaker Cameron Munster remains confident that he will not require end-of-season surgery on his neck despite a fresh scare against Parramatta.

Munster reeled out of a tackle on Eels prop Daniel Alvaro early in the second half and was spotted carrying his left arm alongside his body for a few tackles before bravely putting his body on the line. 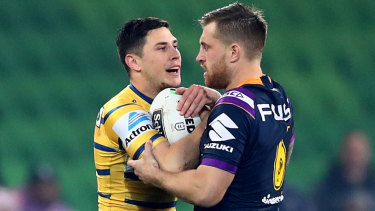 Cameron Munster’s neck flared up for a few tackles against the Eels in the second half.Credit:Getty Images

Like nearly everybody else in rugby league, Munster thought the Storm and Roosters were destined to meet in the grand final rather than a preliminary final at the Sydney Cricket Ground before 30,000 fans.

"I don't know what it is. We've come to the conclusion it's neck stiffness and it then runs down the shoulder,'' Munster told the Herald.

"It might be pinching a nerve in there. I just need to manage it. I want to make sure we're playing some decent footy.

"I'll talk to the doctors and physios at the end of the season and then go with whatever they think is best. Fingers crossed it doesn't need surgery.''

Munster is in the box seat to reclaim the Kangaroos No.6 jersey from incumbent and Roosters five-eighth Luke Keary.

The 25-year-old Munster is a huge fan of Keary.

"Luke is a class player, he's got the majority of their try assists this year, and he's their go-to man, along with [James] Tedesco,'' Munster said.

"He's quick, he's got good ball skills and he's a runner of the ball. He reminds me of myself a bit, and things tend to happen when you run the ball. He's one we need to worry about. I like the way he plays.

"It would have been nice to play them in the grand final, but we didn't play well against the Raiders and made it harder for ourselves. That's footy.

"We know the Roosters like to come out hard the first 15 or 20 minutes. Hopefully we can [start] like we did against Parramatta.''

Munster also had praise for his good friend Cronk, who he will defend against.

"I keep in touch with him every time he does something freaky – so I talk to him every week,'' Munster quipped.

"He works so hard on his game and you can tell. He's clinical with everything he does, he's too smart. His line speed, his defence, the way he pushes players back into the middle and creates this mirage of no space on the outside . . . I'm proud of what he's done up there.

"It's crunch time now, and we're both chasing the same goal.''

Munster was brilliant last weekend against the Eels and has slowly forged a handy halves combination with Jahrome Hughes, who was the Storm fullback less than two months ago.

The same eagle-eyed viewers who noticed Munster clutch at his shoulder would have seen him deliberately swerve back infield and play for a Cameron Smith kick to ricochet off Mitch Moses' leg.