One of the strangest sights of this AFL finals series came in the second quarter of the Swans’ gripping preliminary final victory over Collingwood last Saturday.

Pies defender Brayden Maynard approached Lance Franklin and attempted, in vain, to rub baby oil off the arms of the champion full-forward.

Fair enough, too, because Franklin looked like a greased pig, his arms shimmering under the SCG lights.

Franklin laughed off the gesture then played all over Maynard as the Swans’ snuck home by a point, setting up a grand final showdown with Geelong at the MCG on Saturday.

The Great Buddy can be a slippery character: as a player, roaming the field and pushing away defenders at will; as an aloof celebrity, rarely granting interviews outside of what’s required under the game’s media policy; and, certainly, as a star recruit, negotiating with the Swans throughout 2013 while keeping Hawthorn in the dark and stringing along GWS and the AFL before announcing his nine-year, $10 million mega-deal to jump from the fishbowl of Melbourne into the full schooner glass of Sydney.

Franklin announced on Monday he would play on in 2023 and took great delight in referencing the “knockers” who doubted whether he would fulfil his monster contract. 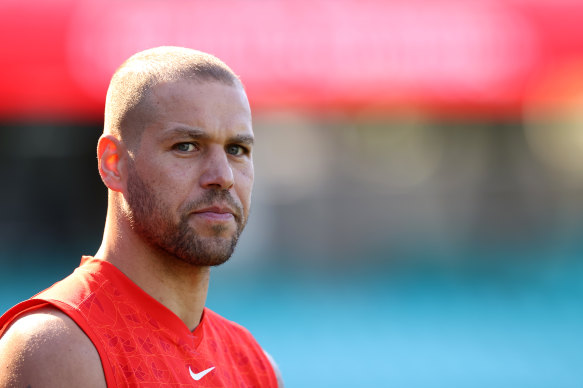 “One more” declared the Swans media release, although the smart money is on “two more”. It won’t surprise if Franklin is stalking the goal square with a Zimmer frame beyond that, his once breakable body now seemingly unbreakable.

Sydney — the city and the club — has become Franklin’s home and today former Swans chairman Richard Colless lays bare the clandestine negotiations that landed Franklin’s prized signature in 2013, including how the AFL had actively tried to sign the champion full-forward for the fledgling GWS Giants.

“Lance was going to do one of two things: stay at Hawthorn or play with the Swans,” Colless says. “The AFL, in breach of all the rules they had just created in relation to free agency, were dealing with Lance and his manager directly, trying to lure him to GWS. The AFL felt they had superior negotiating clout and thought that’s where he should go because they were desperate to fast-track GWS’s success.

“It was a nonsense and it remains so. If you think the best players of all time are going to bottom clubs to get paid more money, you’re out of touch with world sport. He just wasn’t going there.”

The story of Franklin’s stunning arrival at the Swans starts in January 2013 when then CEO Andrew Ireland took a phone call from Franklin’s manager, Liam Pickering, who is close to Swans coach John Longmire.

Franklin had one year to run on his deal with Hawthorn and, in his mind, he had two options: stay at the Hawks and burn under the Melbourne spotlight, reading daily updates about his so-called “rockstar lifestyle” — or move to the Swans.

Ireland then phoned Colless, whose first reaction was: “He’s a once-in-a-generation player. Sign him.”

“It’s important this is understood: we didn’t instigate it,” Colless says. “We knew nothing about it until Lance’s manager, Liam Pickering, who had been best man at John’s wedding, approached Andrew Ireland.” 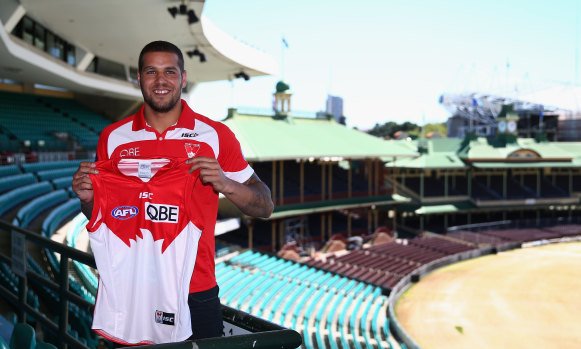 New in town: Lance Franklin after joining Sydney in 2013.Credit:Getty

With the wheels in motion, Franklin and the Swans continued their discussions — including a medical — throughout the 2013 season, although few people knew about it.

It remains one of the true miracles of modern football that the story never got out. One reporter had wind of it but couldn’t stand it up. Franklin’s former Hawthorn teammates have recently said they knew something was afoot because he was sneaking off to take phone calls away from the group and giving away little when he returned.

“The challenge was, ‘How do you sit on this for six months?’” Colless continues. “It says an enormous amount about our club that it did not get out. Not a hint of it. The AFL certainly had no awareness of it.”

That’s clear because the mothership was pushing hard all year for Franklin to sign with the Giants, giving the fledgling franchise the sugar hit it desperately needed.

This was the AFL’s first year of free agency, which allows top-25 players in the eighth season of their time at a club to move on. Franklin was a restricted free agent, which meant Hawthorn had the option to match the Swans’ offer.

“We took a view that they [Hawthorn] wouldn’t entertain a nine-year contract,” Colless says. “Money wasn’t the issue — but the term of the contract was. And that proved to be the case.”

Colless says there was very little pushback internally about the length of the deal. Any concerns about Franklin’s off-field reputation?

“Not that I’m aware,” he says. “You might know more than I do, but I don’t think that’s ever been an issue. He’s been such an easy guy to manage.”

When the deal was announced 10 days after Franklin and Hawthorn beat Fremantle in the grand final, the Giants were furious. “We’ve been led down the garden path,” GWS chief executive Dave Matthews said at the time.

‘It’s important this is understood: we didn’t instigate it’

Says Colless: “David might be showing a hint of naivety. All I know is that it was made very clear there were no other options that were being considered. If GWS or the AFL were led to believe he was a live option, they might’ve been reading more into and believed their own capabilities beyond what they actually were.

“After the deal was confirmed, I had the pleasure of ringing three senior people at the AFL — only one called me back — who said that wasn’t what the free agency agreement is all about, which is not correct.”

Of course, it hasn’t all been shits and giggles during Franklin’s time in Sin City.

In 2014, he crashed the Land Rover of future wife Jesinta Campbell into four parked cars in Rose Bay, admitting “it wasn’t the best look”.

In late 2015, he stepped away from the game for an indefinite period because of mental health issues, sparking wild and unfounded speculation about what was really at play when, in reality, nobody really knew.

He’s struggled at times with injuries and, in 2020, missed an entire season. That’s when the knockers knocked loudest.

Each time, the Swans wrapped their arms around Franklin and his family, such is the strength of the club when it comes to protecting their own.

He’s given so much to Swans but now, nine years down the track, he can provide the ultimate return on their investment.

What chance he won’t let this one slip away?

Suaalii the latest, but not the last

The sleeping giant of international rugby league just rolled over, glanced at the alarm clock and stretched out its arms.

Joseph Suaalii’s shock decision to play for Samoa and not Australia at next month’s World Cup has been met with typical ripostes. He shouldn’t be allowed to play for Australia or NSW again! Ever! Traitor! 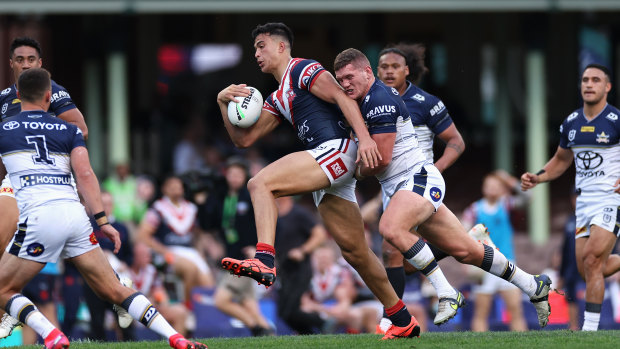 Under the current eligibility rules, he can do both. Samoa is a tier-two country, meaning he and the likes of Brian To’o, Jarome Luai, Stephen Crichton, Junior Paulo and Josh Papalii can chop and change.

After telling Kangaroos coach Mal Meninga that he wasn’t available, Suaalii told News Corp he was honouring his family by playing for Samoa.

Rugby league is in a unique position and it should take advantage of it.

Almost half its players are of Pasifika heritage, many of whom were born in New Zealand before moving to Australia.

It means they have divided loyalties, both to their country and NSW or Queensland.

Instead of this being a bad thing for rugby league, it should be considered as a positive.

The game has neglected international football for so long. Now a new dawn is coming and the aforementioned sleeping giant in the form of minnow nations is waking up.

Suaalii’s withdrawal solves one problem for Meninga: he can pick both Matt Burton and Nicho Hynes in his squad, which will be announced next week.

But he’s lost Payne Haas, who has told Broncos teammates he’s not going to the World Cup for family reasons — although there’s rumblings about him also playing for Samoa. 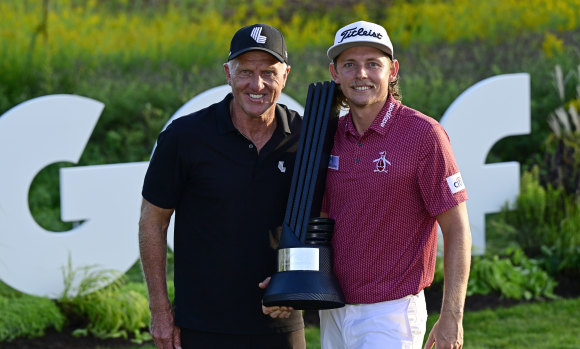 THE QUOTE
“We can’t fit any beers in this trophy, it’d be a little bit difficult.” — Cameron Smith after winning the LIV Golf tour event in Chicago. What the what?! You can’t drink beers from the trophy? This LIV thing will never last.

THUMBS UP
Lauren Jackson returning to international basketball after chronic knee injuries ended her career is a thing of sporting beauty. Jackson, 41, is competing for the Opals in the FIBA World Cup in Sydney — no less than 22 years since she was a young star at the Sydney Olympics. Feel old? Me too.

THUMBS DOWN
As revealed by the ABC’s Russell Jackson, Hawthorn Football Club stands accused of separating young First Nations players from their partners and even pressured one couple into terminating a pregnancy, all for the important matter of winning games of football. Horrific stuff.

It’s a big weekend for … Cody Walker, who can erase the memories of his intercept pass in last year’s NRL grand final when South Sydney meet Penrith in a preliminary final blockbuster at Accor Stadium. Walker and the Bunnies are finding the same kind of September mojo as last year but Penrith are, well, Penrith.

It’s an even bigger weekend for … the Wallabies, who meet the All Blacks at Eden Park on Saturday. Australia will need to shake off the disappointment of a dud decision in Melbourne and then hope they don’t get a series of dud decisions against them in Auckland, as determined by the fickle instrument that is a rugby union referee’s whistle.