Wayne Carey has represented both Victoria and South Australia in state footy and spent the majority of his life outside of NSW. But there is no doubting where his heart truly lies, and his announcement as captain of the state's greatest team of all time is further confirmation. 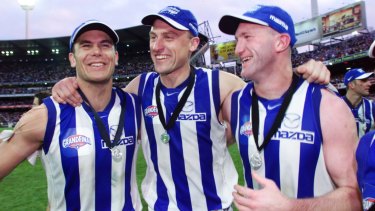 Band’s back together: former Kangaroos teammates Wayne Carey (right) and John Longmire (centre) have both been named in the NSW AFL team of the century.Credit:Vince Caligiuri

"I wouldn't mind running out with that group," Carey said – and why wouldn't he, given the sheer calibre of the final squad of 35 players, drawn from all parts of NSW and across the 140 years of history which is so often taken for granted. Not to mention those left out by the selectors who agonised over what proved to be a supremely difficult exercise.

For Carey, who was never short of an accolade during his legendary two-flag career, it was another opportunity to embrace his Wagga Wagga roots.

"My first ever hero was a guy by the name of Laurie Pendrick, who played for North Wagga, captain-coach, he might have played one or two games for Sydney and then went back home," Carey said.

"I love the fact that they mentioned those guys that didn't go and decide to play (in the VFL), the local legends that didn't decide to go. He wasn't in that list but that was my hero as a kid. 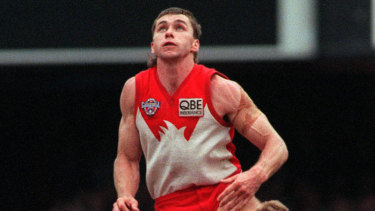 One of the greats: Sydney Swans legend Paul Kelly.Credit:Steve Christo

"That's why today was a special day. I'm a New South Welshman, there's no doubt about that.

"A lot of great footballers come out of NSW and today was a good example of that. I sort of knew Lenny Hayes was from NSW … (but) because he was a champion of St Kilda you forget where they actually come from."

Carey was named at centre-half forward, spearheading a truly stellar front six. In one forward pocket was his old North Melbourne teammate John Longmire – presenting another opportunity to retell one of footy's most infamous sliding doors moments.

Carey was the "steak knives" in the deal that saw himself and Longmire, who were zoned to Sydney at the time due to their Riverina extraction, sold to the Kangaroos as teenagers in 1987 for the princely total of $70,000.

It sounds worse for the Swans every time it is spun.

"It's long enough now – it was worse when I was playing against them," said Swans icon Paul Kelly, another Wagga boy who was named in the opposite pocket.

"We all knew – it wasn't much money. At the time we were broke."

Kelly skippered the Swans against Carey's Kangaroos in the 1996 grand final and was one of two vice-captains, along with Ungarie's Terry Daniher, named on Thursday.

"I grew up playing rugby league," Kelly said. "My goal as a kid was to play State of Origin footy against Queensland."We did try it (in AFL) a couple of times … it didn't work, but that doesn't mean we're any less proud of our state because we didn't get the opportunity to display it.

"To be able to stand up there on the stage with some great names from AFL footy is quite special."

There was a strong Swans flavour in the team with 10 players to have represented the club earning a nod, including three current Bloods – Jarrad McVeigh, Kieren Jack and Dane Rampe.

NSW GREATEST TEAM OF ALL TIME 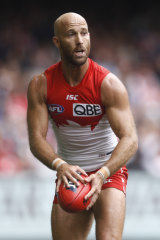 Red and evergreen: Jarrad McVeigh is one of three current Swans to make the cut.Credit:AAP