Home » Rugby League » ‘I should be good to go’: Cleary ready to return as Panthers sweat on Kikau

Nathan Cleary is set to get the blessing from Penrith's high-performance staff and trial against Parramatta on Saturday but the Panthers halfback is now sweating on his "protector" Billy Kikau being cleared of a serious knee injury.

Kikau lasted only three minutes during Saturday night's trial against Souths before he required two Panthers trainers to escort him off Redfern Oval. 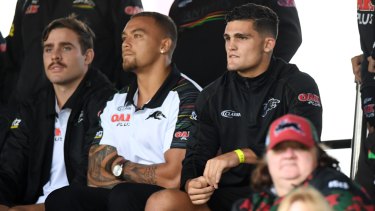 The initial prognosis was he had torn the medial ligament in his right knee, which depending on the grading could result in between two to six weeks on the sidelines.

Kikau took to social media on Sunday and posted: "Definitely not the way I wanted my first hitout of 2019 to look like, but am overwhelmed with the messages of support received from everyone … scans tomorrow to find out the full depth of the injury, then straight into rehab to work towards getting back on the field."

At least Panthers fans can take heart Cleary is ahead of schedule after off-season ankle surgery.

Penrith coach Ivan Cleary said his son was a "chance" to feature against Parramatta but the halfback himself told the Herald he was set to get some vital game time against the club's bitter west Sydney rivals. He had been expected to be given extra time to overcome ankle surgery and go first-up into the season proper.

Cleary switched to the left edge this off-season and will defend alongside Kikau and fellow Fijian Waqa Blake. He was naturally disappointed to see the wrecking ball hobble off.

"It was a massive shame to see [Kikau] come off. I love big Billy and we've formed a good combination there [on the left] and we've been working hard for the year ahead," Cleary said.

"He's my protector. To see him walk off was not a good sign.

"He's probably our best offensive asset and he's also worked hard on his defence as well. The best thing about him is he's got a long way to go, so fingers crossed he'll be all right.

"I'll probably play the first 20 minutes or first half on Saturday. The original plan was not to play but I want a bit of game time under my belt, defensively more than anything.

"[The plan] was all about getting another solid week of training and a few more kilometres into the legs.

"But the high-performance staff have been happy with how I've come back and the 'ks' I've been getting. I should be good to go. I've been back four or five weeks. The ankle feels great now. It was good to watch the boys [on Saturday]. It just makes me want to get out there again."

James Tamou, James Fisher-Harris and Dean Whare will all return for the Panthers against Parramatta while Dallin Watene-Zelezniak will skip the Eels trial and feature on the right wing in round one.

Cleary was impressed with the work rate of props Moses Leota and Reagan Campbell-Gillard in the trial while Dylan Edwards was solid at fullback.

Penrith won their trial 26-8 against Souths, but the home side only fielded their superstars including Sam Burgess during the second quarter.

Cleary has heard plenty about Eels teenage five-eighth Dylan Brown, who he will come up against in his first outing of the year, and said: "'Fish' [Fisher-Harris] and Caleb Aekins know him. He's from the north of New Zealand. It will be cool to come up against him. I always love to see young guys play and to to play against up-and-comers with a lot of talk around them."

A livestream of the Panthers' trial against Parramatta will be called by Channel Nine's Matt Thompson and Phil Gould.