Home » Rugby League » ‘I don’t want to rain on their parade’: Bennett fires back at Penrith

Penrith are convinced South Sydney’s decision to name rookie Blake Taaffe in the No. 1 jersey is a case of September “smoke and mirrors”.

And Souths coach Wayne Bennett was happy to play along by declaring: “We’ll wait and see if he plays or not. I don’t want to rain on their parade.

“You’ll have to wait until Saturday,” Bennett told the Herald. “It’s what makes the game interesting. I’m not going to put any player on that field on Saturday night that I don’t have trust in.”

Penrith halfback Nathan Cleary terrorised Latrell Mitchell and former Panther Josh Mansour with his floating and torpedo bombs just three weeks ago – and most fans are now wondering what chance five-game fullback Taaffe has under the high ball.

Panthers co-captain Isaah Yeo, a proud Bathurst kid who tells it how it is, was certainly not sold Taaffe would line up at fullback in Saturday night’s qualifying final at Queensland Country Bank Stadium.

“I’m not quite sure what they’re doing and if there are smoke and mirrors there,” Yeo said. “Obviously you have to do your video on him and nullify him as much as possible, and he’s there for a reason. 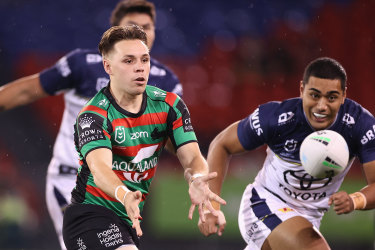 Five-game wonder Blake Taaffe has been named in the South Sydney No. 1.Credit:Getty Images

“They’re fortunate enough to have a lot of different options there [at fullback]. They’ve come out and said Taaffe is playing. We’ll do our due diligence on him, for sure, but I don’t think we’ll be surprised if there’s a change there late.”

Alex Johnston can play fullback but has been devastating on the left wing, while Cody Walker is the other option, but shifting him would weaken his lethal halves combination with Adam Reynolds.

NSW coach Brad Fittler has watched Cleary leave some of his Blues teammates feeling ill at training while trying to diffuse some of the halfback’s bombs, and like Penrith was sceptical about who would actually start at fullback for Souths.

“Wayne knows his players better than anyone,” Fittler said. “Blake is a good little player, but he also showed that he’s still a rookie and makes errors, like any kid. But he’s about to go into a final against Penrith. Without a doubt he’ll be targeted. They’ll test out his positioning. Jarome Luai has a left boot, Matt Burton has a left boot … he’ll learn quickly.

“He also knows the 12 blokes in front of him are pretty good players, and if they do a great job, then Penrith don’t get down the field that far and he’s not catching balls on his tryline.”

Taaffe started against St George Illawarra on the weekend for the suspended Latrell Mitchell. Mitchell and skipper Adam Reynolds will have no doubt peppered Taaffe with bombs at training all week to help prepare for Cleary’s expected aerial assault.

Cleary, who spends time after every training session mastering his kicking game, said he would prepare for several players to start at the back, and “we have to prepare for anything”.

Souths were on the end of an 11-2 penalty count against Penrith, but do lose Mitchell this time around while Penrith gain James Fisher-Harris and winger Brian To’o, who missed the 25-12 win.