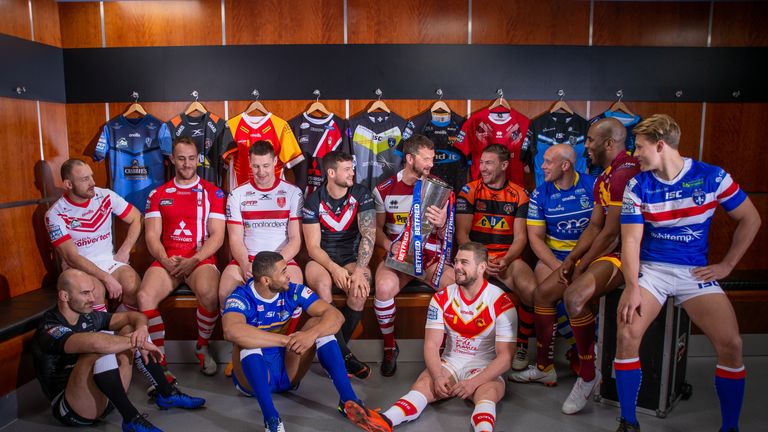 We take a look at how the play-off and relegation battles stand heading into the final round of Super League’s regular season.

What is already decided?

There are only three teams who have nothing to play for heading into Round 29: St Helens, Catalans Dragons, and Leeds Rhinos.

Saints have such an unassailable lead at the top of the table that they had wrapped up the League Leaders’ Shield for the second year in a row by the middle of August – although head coach Justin Holbrook will be keen to head into the play-offs on the back of a win. Catalans’ collapse in the past three weeks has seen them slip out of play-off contention altogether, and they are guaranteed to finish seventh in the table – the same as last year, albeit slightly better off in terms of their points total.

Leeds, meanwhile, overcame a turbulent start to the campaign to steer clear of the relegation battle in the closing weeks of the regular season, earning interim head coach Richard Agar the role as David Furner’s successor on a permanent basis. The Rhinos are set to finish eighth.

How do the play-offs stand?

Wigan Warriors, Warrington Wolves, and Salford Red Devils are assured of places in the play-offs, although what their final placing will be and who they will face depends upon the outcomes of this week’s fixtures.

That leaves Castleford Tigers and Hull FC fighting it out for the fifth and final place, with both teams currently on 30 points, but the Tigers occupying the remaining play-off spot by virtue of a far superior points difference.

Daryl Powell’s side currently have a points difference of plus-106, while Lee Radford’s men are on minus-107. Therefore, a win away to Wigan on Thursday, live on Sky Sports, would make certain of Castleford’s play-off place – regardless of how Hull do at home to St Helens the following night.

The Black and Whites must therefore hope that Castleford lose to the Warriors in Thursday’s game and that they can become only the third team to overcome Saints in Super League this year if they are to sneak into the play-offs. 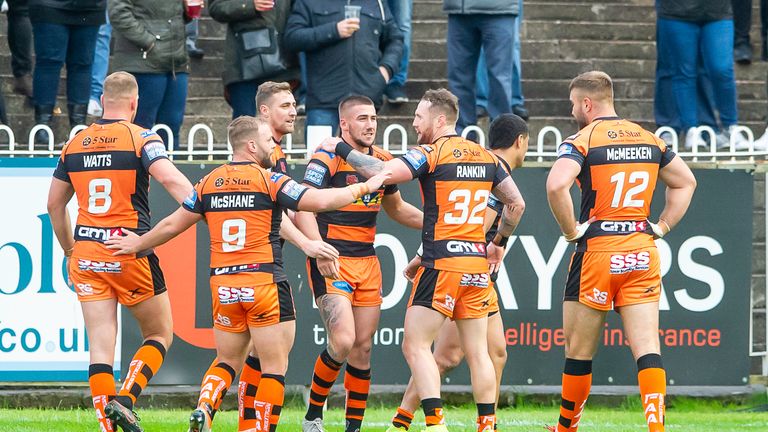 The Wolves would take second if Wigan lose and they win away to Leeds by virtue of a far superior points difference. Yet defeat for the Challenge Cup winners at Headingley would leave them in danger of finishing below Salford – if Ian Watson’s men beat Hull KR – and as low as fourth.

At present, the Red Devils – who could finish as high as second and, mathematically, as low as fifth – are only 13 behind Warrington in terms of points difference. A win over Rovers, plus defeat for Steve Price’s side, would see Salford move above them.

Should both teams win or lose – or even draw, in the event ten minutes of golden-point extra-time fails to produce a winner – in their respective matches, they would be level on points and it would come down to tie-breakers to decide where they finish.

If teams are level on points difference, the second tie-breaker is points percentage, which is calculated by dividing points scored by points conceded and multiplying that number by 100. If teams are still level, it goes to tries scored, goals scored, drop goals scored and – finally – the toss of a coin.

Given how Salford have scored 134 tries to Warrington’s 116 going into these games, it is highly unlikely to go any further than that should the clubs be level on points, points difference, and points percentage after Round 29.

Who could face who in the play-offs?

St Helens are already seeded through to Round Two of the play-offs by virtue of finishing top of the Super League table. They will host the winners of the match between second and third. 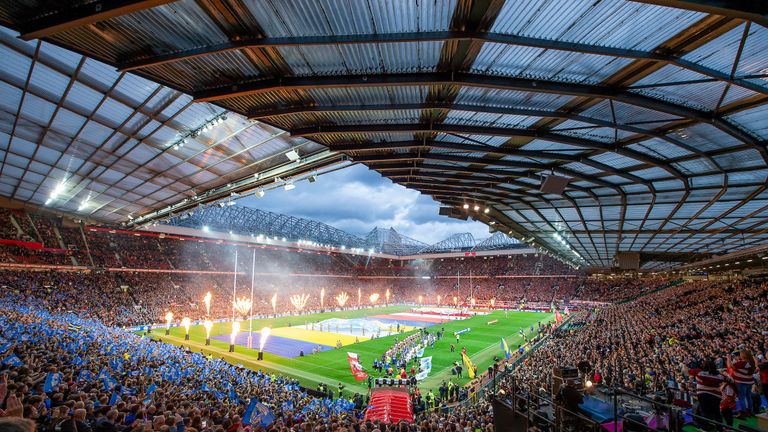 The winner of that match at Totally Wicked Stadium goes straight to Old Trafford for the Grand Final. The loser gets another chance, however, against the team which emerges from the other half of the draw.

Round One sees two matches take place: second versus third and fourth versus fifth. The loser of the former would play the winner of the latter in round two, with the winner from that game going on to play the loser of the match at St Helens for the remaining Grand Final place.

Still not sure how it works? We have a handy video explaining the process below… 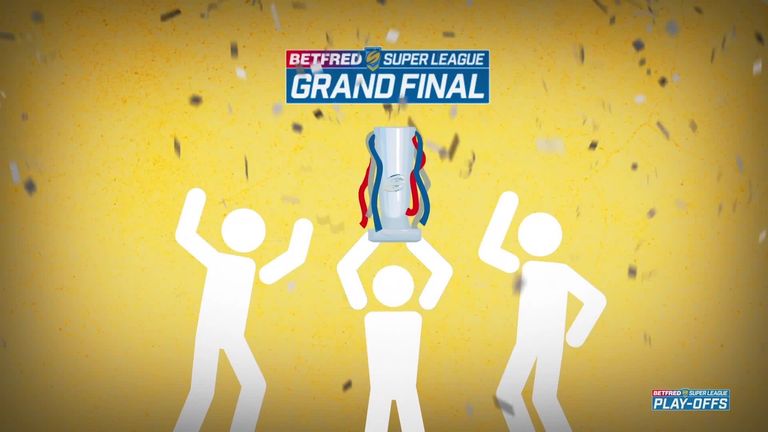 What about the relegation battle?

Super League has never known a relegation battle like this one, with four teams level on 20 points fighting to avoid finishing bottom of the table and dropping into the Championship for the 2020 season.

Wakefield Trinity, Huddersfield Giants, Hull KR, and London Broncos are the four who must wait until Round 29 is over to see how they stand.

In a further twist, Wakefield and the Broncos face each other at Mobile Rocket Stadium in the final round of the regular season, live on Sky Sports on Friday, and that means a win for either would assure them of a place in Super League for next year. 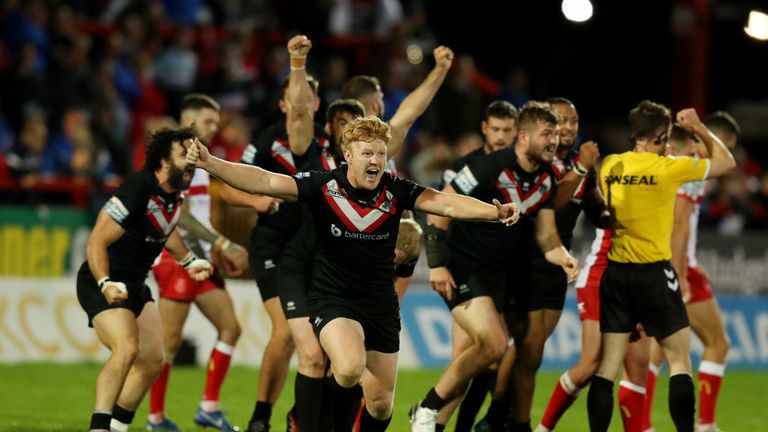 Trinity have a far superior points difference to the three other teams embroiled in the relegation fight, but defeat for them and avoiding defeat for the Giants and Rovers against Catalans and Salford respectively would see them finish bottom.

Victories for Tony Smith’s side and Simon Woolford’s men would see them stay up. Were they to both lose, it would then come down to tie-breakers with the loser of the match between Wakefield and London – the Broncos being by far the worst off in terms of points difference.

If the Giants lose and the Broncos win, then Huddersfield would become dependent on Rovers losing at Salford to stay up. In the case of Rovers losing and the capital city side winning, the East Hull outfit would need the Giants to lose by a margin of 13 points greater than their loss to the Red Devils to stay up.

In the unlikely scenario of a draw after ten minutes of golden-point extra-time at Wakefield, Huddersfield and Hull KR would also face a nervous wait to see which tie-breakers come into effect if they both lose.

It would be the same in the even more unlikely scenario that Wakefield and the Broncos draw, and Hull KR and Huddersfield do likewise in their games.