After what I saw last Thursday night, the clear NRL premiership favourites are the Penrith Panthers.

Their 12-10 win over Melbourne and the way they held up Storm centre Justin Olam on the final play shows how hard they work off the ball for one another. 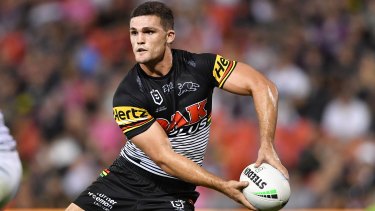 Nathan Cleary is back for the Panthers.Credit:NRL Photos

For me, there’s a question mark over Crichton’s positional play at the back but he will probably prove me wrong.

What Penrith do best is back themselves to stay in the arm wrestle for the whole match.

They have high completions, few errors and give away few penalties. 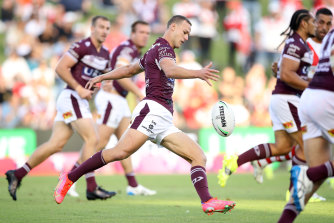 Manly skipper Daly Cherry-Evans will have to kick his side to victory.Credit:Getty

Dylan Walker is doing his best but he’s struggling to find the combinations in attack with halves Daly Cherry-Evans and Kieran Foran.

They also have very little attack out of dummy half.

I’m not having a shot at Lachlan Croker, because he’s playing out of position and the extra workload caused by his side’s silly errors means he doesn’t have any petrol in the tank to create.

But, with the quicker ruck this season, it’s essential to engineer more out of dummy half.

If Manly are to win, Cherry-Evans must kick his side to victory.

With their attack struggling, he needs to roll the dice and try to score a few tries from kicks whenever Crichton is out of position.

Manly need to be as unpredictable as possible because structured set plays against a defensive line as hard-working as Penrith’s won’t cut it.

They have two great ball-players in the forwards.

Marty Taupau has that late left-arm offload, which borders on compulsive, while Jake Trbojevic has the vision and skill of a halfback.

Walker can’t get himself in the right situations with his halves so they need to use these two guys more and play unstructured footy.

I figured he’d be a solid centre who doesn’t miss tackles, doesn’t make errors, but the decision to move him into the forward pack has been a masterstroke. 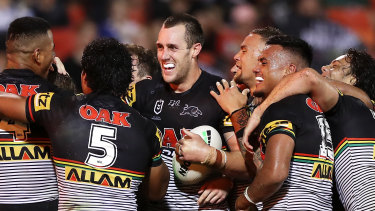 He gets better and better each season. He plays 80 minutes, does all the tough stuff in the middle and cleans up the defensive errors of others.

When I talk about doing work off the ball, this is the bloke who does so much of it. His efforts aren’t for himself – they’re for his teammates.

And his ball-playing and pass selection is improving with every game.

When I’m coaching halves, I tell them the ball is a magic wand. The defence looks at the ball, not at you.

From a wide field position and moving from left to right, he will have two forwards coming under him on an angle.

He will dummy to his two middle forwards and go hard at the edge of the ruck where Manly’s back-rower will be defending.

He will get his back-rower running just to the outside of that defensive back-rower before dummying and slipping through.

It sounds simple, one most halves attempt, but it’s the 10 per cent polish that makes the play special. 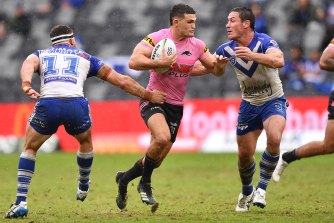 Nathan Cleary loves to get on the outside of the opposition back-rower, dummy and then scoot through the gap.Credit:NRL Photos

Cleary is one of the best in the competition at “tempo running”.

When he comes across, showing the ball, he’s running fast-to-slow, fast-to-slow, and what this does is make the defence sit on its heels and stop.

Once he dummies to those two players, he gets the ball out in front and shows the ball.

He will mesmerise the defensive back-rower, throw the dummy, and slip through.

This game will be closer than people think because Manly will aim up physically.

I just question where they’re going to find points against a Penrith side as well drilled as this one. I expect the Panthers to win the arm wrestle and then run away with it.