I remember saying these words to my father Peter on the afternoon of Sunday, September 20, 1998. I was eight and had been at school for an extracurricular activity and the preliminary final between Parramatta and Canterbury was being televised on delay on Channel Nine (oh, the good old days of no live coverage).

Dad had told me not to, but I turned on the live ABC radio coverage on the way home. I knew that Parramatta were up 18-0 with just over 10 minutes to go and felt confident enough to declare to him that the Eels were going to a grand final when I got home.

I remember curling up next to my hero, my Dad, to enjoy those final 10 minutes. Every Eels fan knows what happened next. The Bulldogs went on to win that game 32-20 in extra-time with Daryl Halligan breaking plenty of blue and gold hearts across Sydney’s west.

I was distraught. My Dad went for a long walk when the final siren went.

This was my first year supporting the Parramatta Eels. I wanted to spend more time with my Dad on the weekend, so that meant watching footy. If you grew up in the Konstantopoulos household and wanted to see your next meal, you had to support the Eels. I had no choice but it didn’t take me long to pick a favourite player: Clinton Schifcofske. 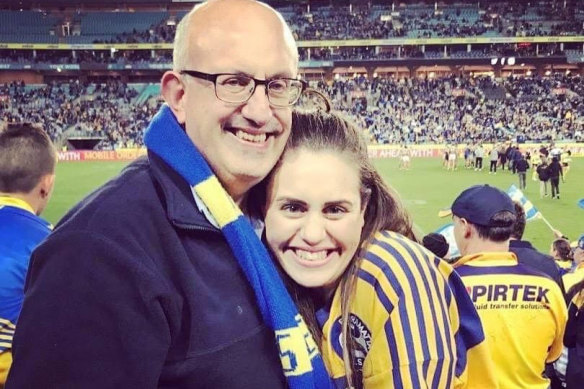 Mary Konstantopoulos with her father Peter.

Since that time, so much has changed. I am no longer a chubby, eight-year-old-girl who waves her flag at every Eels game I go to. I’m now 33 and life looks a little different from how it looked in 1998.

But one thing has stayed constant, alongside love for my family, and that is my love of the blue and gold. During the past 25 years there have been many moments of heartbreak. These are the moments that define you as a fan. The 2001 grand final against the Newcastle Knights, the 2005 preliminary final against North Queensland (I listened to Fix You by Coldplay for two weeks on repeat after that one), the salary cap saga which almost brought the club to its knees in 2016 and, of course, the past couple of seasons when the Eels have come so close to breaking the ‘week two hoodoo’.

But there have also been moments of pure joy. I will never forget the magic run in 2009 and cheering for underdog players like Todd Lowrie, Jeff Robson and Matt Keating. I’ve been looking back at photos from that time this week and they bring back some special memories.

I may not have been alive when they burnt down Cumberland Oval in 1981 after the Eels’ first premiership win, but I was there for the first game at the new stadium in 2019 when Mitch Moses roared into the crowd after scoring a try in the thumping of the Wests Tigers that opened our new home. 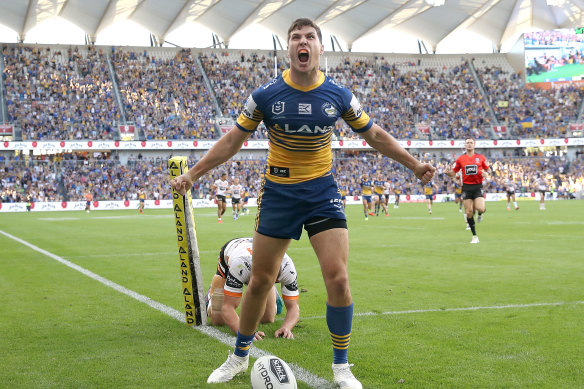 Mitchell Moses christened the Eels’ new home in style in 2019, scoring the first try at Bankwest Stadium to kick off a 51-6 thumping of the Tigers.Credit:Getty

The announcement in 2021 that Parramatta had been granted a licence to compete in the NRLW was another day that I will never forget.

How much has changed.

The introduction of the Eels women’s team was when our club became completely whole, and even though having two teams to cheer on every weekend means double the stress, I wouldn’t have it any other way. 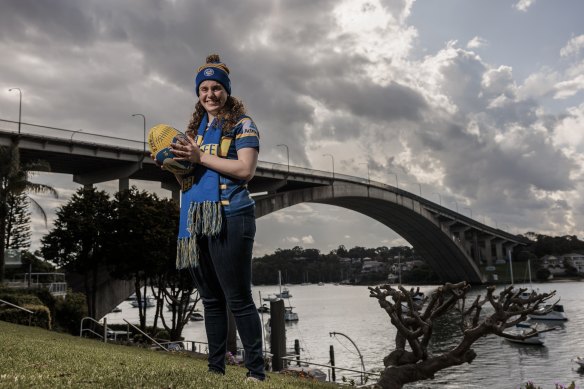 Mary Konstantoupolos on the banks of the Parramatta River this week.Credit:Brook Mitchell

This weekend another chapter in Parramatta Eels history is about to be written. But it would be unfair to look at this week in isolation without considering the journey that this club has been on since 2016.

This weekend is for all the true believers. The fans that have stood by this club and loved it for so many years. It is for the administrators, those that are still at the club and those that guided the club back from the dead in 2016. It’s for our players, and it’s for our coaches, Brad Arthur and Dean Widders.

I wish both the women’s team and the men’s team the best of luck for Sunday. I hope they have had the opportunity to take a breath and see just how much this weekend means to the entire Parramatta Eels family.

I’ll be in the stands, cheering them on, like I always do, and my Dad will be by my side like all those years ago on the family couch.

And win or lose, we’ll be heading back to Church Street for one hell of a party.

Watch the NRL grand final exclusive, live and free on Channel 9 and 9Now.