Hind went to a supermarket at the Altona Gate Shopping Centre on Saturday, August 21 for a takeaway lunch, prompting the Department of Health and Human Services to notify him on Wednesday that he had been to an exposure site. 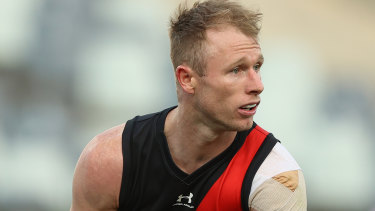 Nick Hind on one of his trademark runs off half-back.Credit:Getty Images

While the dashing half-back has since returned a negative COVID test, he is not allowed to head to Tasmania, as the state’s protocols say anyone who has visited a tier 1 or tier 2 exposure site in a 14-day period before arrival will not be allowed to enter.

Hind has been replaced by Marty Gleeson, while Jye Caldwell will play his first senior match since round two when he hurt his hamstring. Dylan Clarke has been omitted.

Bombers football manager Josh Mahoney said the club was determined to protect the health and safety of the Tasmanian community.

“We understand the reasons for these protocols and respect the Tasmanian guidelines, which treat Tier 1 and Tier 2 exposure sites as the same risk,” Mahoney said.

“This means that Nick will be unable to enter the state and won’t play in our first final against the Bulldogs.

“This is, obviously, an unfortunate situation for Nick to be in. He briefly visited a supermarket for a takeaway lunch and has followed the correct procedures, including QR codes while co-operating fully with the AFL and DHHS guidelines.

“The club has been in constant dialogue with the Tasmanian government throughout this period and respect their health and safety protocols, which are designed to protect their local community.

“Given Nick’s negative test result, the club will work with the AFL and the relevant state bodies on his availability for future finals should we continue to qualify.”

Hind is a major loss having played all 22 home-and-away matches, averaging almost 23 touches per game, and was one of the recruits of the year after crossing from St Kilda.