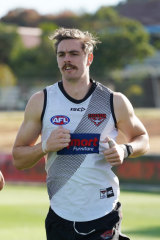 Joe Daniher's efforts at training are impressing Essendon captain Dyson Heppell, who hopes the key forward will play in their Good Friday blockbuster.

The All-Australian is a chance to make his long-awaited return against arch rivals North Melbourne.

Daniher did not play after round seven last season because of osteitis pubis.

He looked scratchy in the pre-season before a calf muscle injury sidelined him again.

But Heppell is confident that Daniher is close to playing senior football.

"It would be awesome to have him back soon," Heppell said.

"He took a big 'hanger' at training the other day and he's moving really well.

"I'd love to see him in there, but match committee will decide that best.

"Joe himself, he's pretty honest on where he's at, so he'll have a bit to say in that as well."

Coach John Worsfold has said Daniher could come back either through the AFL or VFL.

Another complication is the death last Friday of Daniher's grandfather Jim, the patriarch of the famous football clan.

This will be the first time that North play Essendon, their biggest rivals, in the marquee Good Friday slot.

North captain Jack Ziebell said the crowd size at Marvel Stadium would determine whether they play the Bombers annually on Good Friday.