Cameron Smith sat in the commentary box at Suncorp Stadium on Wednesday night, after completing hours of interviews earlier in the day to launch his autobiography.

Of the many themes which have filtered out of his book, one was the fact he would not play an extra year at the Storm if it meant jeopardising the futures of Harry Grant and Brandon Smith. Read: I'm not going back to Melbourne in 2021. 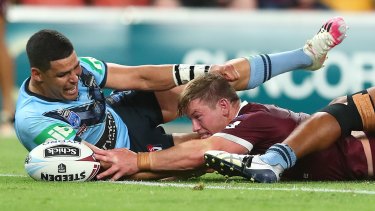 Harry Grant scores for the Maroons on his State of Origin debut.Credit:Getty

Thrown into the fray after just 24 minutes in place of Jake Friend, Grant rammed home the Queensland advantage, which was there from the opening exchanges in front of a heaving crowd at Suncorp Stadium.

And with NSW teetering mid-way through the second half, he delivered the knockout blow, almost crawling his way to the line, reaching out to land the point of the ball a millimetre onto the stripe.

The Maroons won the unwinnable series, beating the Blues 20-14 in one of the great Origin boilovers.

And a kid who almost died as a 12-year-old after contracting staph infection was one of the chief architects.

'I remember Cameron Smith … I think this fella Harry Grant could well have a similar effect on this Maroons generation.'

"I hate putting raps on young fellas like this and certainly I don't want to do that, but I can remember when Cameron Smith played his first Origin game, back in 2003, and he got our attention straight away," Phil Gould said in commentary.

"And I walked away and I said, well, Origin just night have changed forever at the moment. And I think this fella Harry Grant could well have a similar effect on this Maroons generation. He's so aggressive. He's so talented."

A diehard New South Welshman, Paul said he would only ever switch allegiance if his son played for Queensland, given Harry qualified for the Maroons because he was raised north of the Tweed. Maybe a little reluctantly, Paul was a Maroon on Wednesday night and might not ever come back.

Whenever Grant touched the ball, Brad Fittler squirmed in his seat. He better get used to the feeling.

Next year, Grant, who spent the year on loan at the Tigers given Smith was blocking his path at the Storm, is poised to rekindle his association at Melbourne with Queensland teammate Cameron Munster, who taunted the Blues in a mesmerising first-half display.

If a suite of concussion experts had their way, Munster wouldn't have played in game three after being knocked out inside the first two minutes of NSW's thumping game two win in Sydney.

If only the Blues could have found a way for Grant not to play either.