Hawthorn forward Jack Gunston has resumed running after back surgery and appears on track to rebound from a frustrating season where he managed only one match.

A bulging disc and subsequent surgery late last year forced Gunston to have a delayed start to 2021, and he returned to the senior line up against St Kilda in round seven. But his season was soon over when the back problems flared, and the 2020 Peter Crimmins medallist again went under the knife. 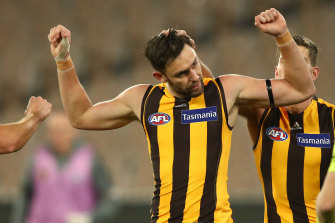 Jack Gunston is hoping for a rebound season in 2022.Credit:Getty Images

The view at the time was that this would allow the slick marksman to complete a full pre-season, with this plan now coming to fruition.

“Jack has been building a really good strength base over the past couple of months and has now commenced his running program,” Boyd said.

“He has been feeling really good after the follow-up procedure and he’s been in at the club on a regular basis lately to ensure he is getting himself in the best shape possible.

“The big focus for him has been to build his strength through his hips and back in preparation for next year.

“We anticipate that he is going to get a really strong pre-season in, given the surgery was early enough in off-season.”

Gunston was one of a handful of Hawks’ stars put on the market during this month’s trade period. Already contracted for next season, the 209-game veteran did not want to leave and a suitable deal could not be brokered. Gunston had been linked to a Collingwood move in last year’s trade period.

Regardless of the trade period machinations, the triple-premiership star shapes as an important piece under former teammate and new coach Sam Mitchell, who is embarking on his maiden year in charge.

Fellow veteran Luke Breust booted a season-high 33 goals this year, with emerging youngsters Dylan Moore and Justin Koschitzke each supplying 27. Gunston will add greater potency inside attacking 50 and his willingness to help usher through fellow marking target Koschitzke on and off the field will also be important, as the Hawks undergo a rebuild.

Hawthorn list boss Mark McKenzie has conceded the Hawks failed to improve their draft hand in the trade period and says the next two national drafts will be particularly important in having his side back in the premiership hunt sooner rather than later.

The Hawks have several issues to address through the summer, including the type of game plan Mitchell wants to implement – he has admitted scoring has been an issue in recent seasons – and whether Ben McEvoy retains the captaincy.