The Hawks announced on Monday morning that captain Stratton and small forward Puopolo would both retire at the end of the season. Stratton, 31, will line up for his 202nd AFL match against the Suns while Puopolo is stranded just shy of the 200-game milestone with Sunday to be hid 196th game. 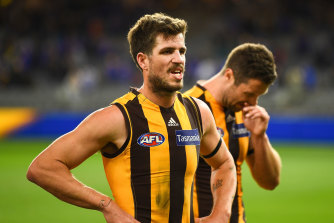 Ben Stratton will retire at the end of this season.Credit:Getty Images

"Stratts and Poppy are exceptional examples of Hawthorn people, each with an incredible work ethic and each highly respected among our playing group and within our club," said Hawks coach Alastair Clarkson.

"Stratts is the sort of guy you want beside you when you go into battle. He is relentless, selfless and will never stop competing.

"He never fails to take a teammates-first approach and it is these qualities that make him so highly valued amongst his peers and also the broader footy world.

"Poppy is an incredibly resilient player and person. He came to us as a defender and leaves the game a master of the pressure forward role. 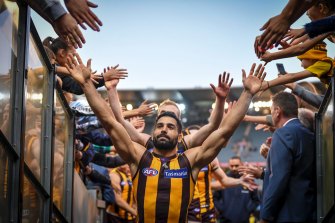 Paul Puopolo is hanging up the boots.Credit:Eddie Jim

"For most of his career, Poppy was always the first name selected in the side each week because you could never doubt the intensity, energy and pressure he would bring to the game.

"Poppy is an amazing example of how far hard work and perseverance can take you in your career.

"Both Stratts and Poppy were drafted to the club as mature age recruits and are fantastic role models for what you can achieve if you have belief and determination.

"As a coach, they are both players you love to have in your side. They never give in and they will put absolutely everything on the line for their teammates and the club.

"I’m thrilled that we will have the opportunity to see them pull on the boots one last time on Sunday and I know their teammates and our members are excited for the chance to farewell them.

"On behalf of the club I would like to thank Stratts and his fiancee Laura, and Poppy and his wife Carmel and daughter Giselle for the sacrifices and contributions they have made to our club.

"They will always be a part of the Hawthorn family and will forever be welcome at our club."