Defender Michael Hartley has knocked back a contract offer from Essendon and decided to chance his arm at continuing his AFL career elsewhere.

After spending a couple of years on Collingwood’s rookie list, Essendon picked up Hartley with selection No.68 in the 2015 draft. 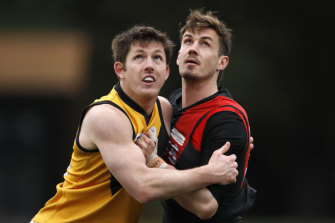 Michael Hartley (right) has rejected a one-year deal from Essendon and will look elsewhere.Credit:Getty Images

Hartley was a regular fixture in the Bombers’ line-up in his first two years with them, including the ill-fated 2016 campaign which was ruined by a raft of doping-related suspensions to star players, playing 37 of a possible 45 games.

But he struggled for opportunities in his last two years at Tullamarine, managing just seven appearances for the Bombers in that time for a career total of 44.

“We offered Michael a contract, but he indicated to us that he wanted to explore other opportunities,” Essendon football manager Dan Richardson said.

“Michael is a highly respected person at the club and his attitude and commitment to the program have been commendable.

“On behalf of the club, I would like to thank Michael and wish him all the best with his future endeavours.”

Hartley has delisted himself which means he can be picked up as a delisted free agent by another club. He also has the ability to be drafted at the end of the month.