Lance Franklin has come back to haunt Essendon once again, kicking the decisive goal to seal a thrilling three-point win for Sydney on Thursday night and continue their miraculous start to the AFL season.

It was all up for grabs in a tense, scrappy final term at the SCG, where the ball spent most of the time locked up in Sydney’s forward 50 – but the hosts were unable to land the killer blow, with Luke Parker, Tom Hickey, Tom Papley and Nick Blakey among those guilty of missing easy chances to stretch their lead. 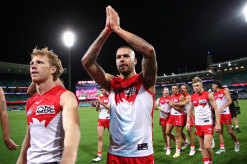 Lance Franklin inspired the Swans to their fourth straight victory to open the season.Credit:Getty

It took a champion to show them how it’s done. With just over three minutes to go, Franklin plucked a glorious contested mark from deep, went back and converted to notch his third goal, number 950 for his career, and ensure he will live on in the nightmares of Bombers fans for at least a little while longer.

“They played some pretty good football this year and we knew they’d come out and have a proper crack,” Franklin told Seven post-game. “They really stepped it up tonight, but grinding out games is really good. We’ve got such a young team, to find a way through that and win is a good sign.

The Bombers, to their credit, fought to their end, with a late snap from Cale Hooker keeping the Swans sweating until the final siren – which, when it came, triggered bedlam among the 28,039-strong crowd.

This wasn’t as pretty a win for the Swans as their previous ones over Brisbane, Adelaide and Richmond, which surprisingly came and went without incident – although it might have been a lot easier had they kicked straight.

Down by 25 points early in the second term, with star forward Isaac Heeney off injured with a broken hand and the system of play that had worked so well for them breaking down, it would have been easy for the Swans to drop their heads.

Essendon had kicked six unanswered goals across the first and second quarters, a run that ended with a miraculous effort from deep in the forward pocket by Darcy Parish – the sort of goal you concede when everything’s going against you. Their plan to clog the corridor and force Sydney down the line was working, and had been helped along by a series of squandered opportunities in attack by the hosts.

But Sydney persevered, and piled on the next six goals in response – with Franklin’s second, after a brilliant kick inside 50 from the busy Errol Gulden, putting them back in front.

From then on, it was a true arm-wrestle. Inspired by some promising kids of their own, Essendon were gallant and would have lost no admirers for their performance, despite falling agonisingly short.