The AFL has reshuffled the round two fixture with the Western Bulldogs and the Brisbane Lions unable to field teams due the number of players isolating, as they adhered to the league’s COVID-19 health and safety protocols.

Geelong were scheduled to play the Western Bulldogs while the Blues were meant to play the Lions in round two, but the league has switched their match-ups. 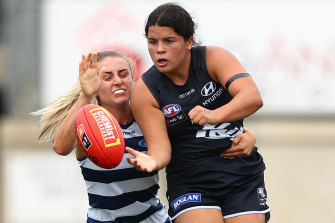 Carlton’s Madison Prespakis is challenged by Geelong’s Amy McDonald. The AFLW fixture has been changed.Credit:Getty Images

It means Geelong will play Carlton and the Western Bulldogs will play the Lions on a date yet to be determined with the league saying the game will be played “as soon as it is safe and practical to do so”.

Geelong’s head of AFLW Brett Johnson said the Cats were rapt to be able to host Carlton at GMHBA Stadium on Saturday night.

Under the league’s COVID-19 match-rescheduling rules, teams are required to have a minimum 16 primary-listed players and five train-on players available to play, with both the Bulldogs and the Lions informing the AFL that they were unable to meet that requirement this weekend.

Head of competition management Laura Kane said players and staff knew they would have to adapt.

“We will continue to monitor the situation and will work closely with both clubs on a revised fixture and, together with the AFLPA, support all players impacted,” Kane said.

“We remain committed to delivering a full season in a safe manner anchored in the advice of respective governments and public health officials.”