Home » From the Archives, 2009: Richmond storm home to steal win from Melbourne

FORWARDS played back, and backs played forward for Melbourne. But in a strange, low-standard game between ordinary teams, the most significant oddity was the last kick. 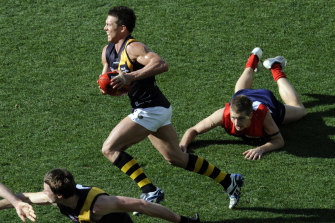 Jordan McMahon, who was credited with 10 ineffective kicks from a tally of 14, nailed a set shot after the siren from 45 metres.

At one level — the shape of the ladder and finals — there was absolutely nothing riding on McMahon’s left foot. But in terms of draft picks and the tanking debate, McMahon’s kick was highly significant. 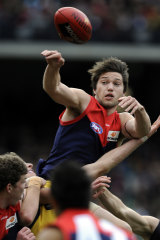 One suspects that AFL boss Andrew Demetriou would have been willing McMahon to miss; for if the Dees snatched victory, with only 19 fit men, coming from two kicks behind in time-on, against a team rated slightly better, then Demetriou would be able to seize upon the result to back up his public statements that there was no thing as tanking.

Combine a Melbourne win with West Coast’s upset over Essendon, and the mute button would be pressed on those voices railing against Demetriou’s priority picks.

Regardless of how ambivalent the Melbourne Football Club administration and football department feels about the prospect of winning more than four games, the players who wore red and blue yesterday seemed more committed than their Tiger counterparts.

Questions were asked of Demon coach Dean Bailey, about what he called “experimentation” in positioning — especially the placement of the lumbering Paul Johnson at full-back for much of the game, on Jack Riewoldt and briefly Nathan Brown, while defenders Matthew Warnock and James Frawley were sent forward, where they are seldom seen.

It says something about the state of Melbourne‘s forward line this year that the Dees didn’t lose anything at all with Warnock and Frawley deployed in attack. 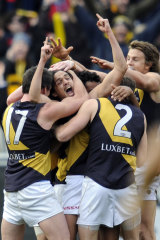 Richmond’s Jordan McMahon who kicked a goal after the siren to win the game.Credit:Sebastian Costanzo

The Demons had often seemed likely to be overwhelmed in the second half, given the limitations imposed upon them by injuries to Matthew Whelan (planta facia), Stefan Martin (corked calf) and Jamie Bennell (medial strain); ultimately, Whelan would be brought back on in the last quarter to stand limply in the forward line.

During the back-end of time-on, the Demons booted two magnificent goals — one to Jack Grimes from an interception, then a beautiful finish by Ricky Petterd with one minute 40 seconds left — only to be denied by McMahon, who was found by Richard Tambling in a squared kick from near the boundary.

The Tigers won, thanks to McMahon leaving his straightest kick to last, but as their normally upbeat coach Jade Rawlings indicated, this was not a victory to get excited about.

They prevailed, too, because of the class of Ben Cousins and Brett Deledio (the former’s hard running an example to the latter), the competency of Nathan Brown and Chris Newman and the efforts of battling Jake King, whose serial pest tag on Aaron Davey was the most interesting subplot within the game.

Richmond stank for large parts of the game, but remained ahead — or just behind — because of the similar ineptitude of the Demons, who fielded a team that possibly had more key components missing than did the Tigers.

Tanking speculation aside, the upshot was that the frenetic final few minutes salvaged one of the season’s worst standard games.

In a game in which even the better players misused the ball, the class of Ben Cousins and Brett Deledio stood out for the Tigers. But Melbourne‘s skipper James McDonald was the game’s best performer, while Ricky Petterd was lively and clean across half-forward.

Strange as it sounds, the turning point came after the siren, when Jordan McMahon converted from 45 metres, to win the game for the Tigers; up until Richard Tambling found him, with at most a second left, the game had seemed Melbourne’s.

It was a terrible standard of game, saved by the exciting finish. Melbourne players were more desperate, but questions about how badly the club wanted them to win will continue because of the experimental moves.