In a season of stirring comebacks, none has been finer than Melbourne’s effort last night to swamp a gallant Western Bulldogs in the final five minutes to secure a gutsy four-point win. 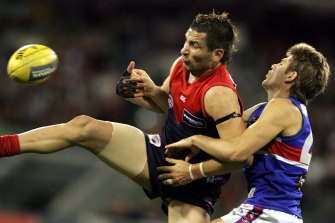 In doing so the Demons kept their September dreams alive and ended the Dogs’ fairytale run.

When Bulldogs forward Brad Johnson bobbed and weaved to kick his third goal for the night at the 14-minute mark of the final quarter he extended his team’s lead to 22 points. It had appeared to the 32,621 fans at the MCG that the Dogs were on their way to the finals. It didn’t look a pivotal moment when, just seconds later, Adam Cooney ran into an open goal and shanked the kick for a behind. But it is a moment that will now be combed over for months by the youngster.

As seems the rule in 2005, there was of course to be one more twist in what was already an absorbing match that had ebbed and flowed all night. 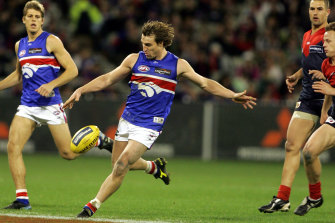 The rush of four Melbourne goals started at the 20-minute mark, with a simple mark 15 metres from goal by ruckman Jeff White. When he calmly cut the lead to 15 points, the alarm bells didn’t really start ringing for the Dogs.

But things became uncomfortable when two minutes later Adem Yze – released out of defence and into the forward line only in the final quarter – marked an errant kick-in and kicked the second of his last-term goals to cut the lead to nine points.

All of a sudden, the Demons had options in the forward line. It had not been that way earlier in the night, with Russell Robertson playing a lone hand. Even though the contest had been tight for much of the night, it was Robertson who had kept Melbourne in the game. 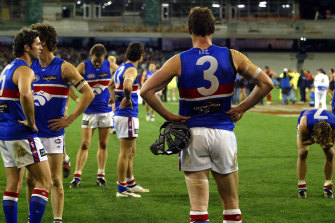 The Bulldogs had taken a bit of a gamble playing Brian Harris on the in-form Demon. Harris has been among the Dogs’ best defenders this year but there was always the danger he would not be quick or agile enough to go with Robertson. After Robertson’s fourth goal midway through the second quarter, coach Rodney Eade was forced to switch Dale Morris on to Robertson and send Harris to full-forward.

Robertson would end the night with six goals and was clearly the most dangerous forward on the ground, but remarkably he did not kick a goal in the last quarter.

With five minutes left to play, Daniel Giansiracusa won a free kick in his forward pocket but he sprayed the shot that would have given the Dogs breathing space. Melbourne quickly transferred play to its end, where Ben Holland took a strong pack mark. He kicked the goal and reduced the margin to four points. 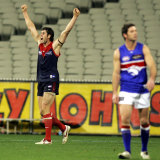 The Demons had cut the influence of Scott West by rotating players against the Bulldog champion. West had had 12 possessions in the opening quarter and 18 by half-time, but the efforts of James McDonald and Phil Read reduced West’s effectiveness.

A rushed behind to the Demons cut the margin to three points, but the real drama came at the 30-minute mark, when White was awarded a free kick at a boundary throw-in. With Will Minson and Holland at the contest, it was Wade Skipper who was penalised when White cannoned into him.

White held his nerve and drilled the goal from close to 50 metres, putting the Demons in front for the first time since the third quarter.

For the second week in a row, Melbourne had won at the last gasp. With Cameron Bruce to return from injury, the Dees are on a roll. Still there will be concerns over captain David Neitz, who kicked one goal and spent much of the night on the bench.

Miller (quad). Whelan (calf) replaced in selected side by Read.

The spirit in the group, they weren’t ready to give the season up and I couldn’t be prouder, couldn’t be prouder to coach them . . . We were tenacious in our ability to hang in there, the courage of our players to continue to run and chase and tackle. I thought our leadership from our leaders on the ground was superb.

It’s just a part of the learning curve that the guys have to go through. We probably experienced that, like everything else, earlier than we thought. Teams that end up being successful go through some hard patches and get a kick in the guts and that’s a pretty big kick in the guts tonight for the guys.