Home » From the Archives, 2003: Port home in a thriller against the Lions

Port home in a thriller

Port Adelaide last night won the heavyweight showdown of the year over the Brisbane Lions by one point.

It had the build-up of a classic, and the teams did not disappoint. The dual premier, Brisbane, riddled by injury, with four losses from its past six games, matched against its No. 1 contender and competition pacesetter, Port Adelaide – it was a shame there had to be a loser. 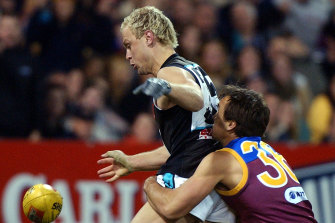 The Lions have now all but forsaken any chance of a top-two finish and a home final and could slip as low as seventh depending on other results in this round. Port, in contrast, skips a game-and-a-half clear on top of the ladder.

Josh Carr’s battle with Michael Voss produced one of the match-ups of the year. Carr was meant to be a tagger, but the contest became a talent showcase as both racked up huge numbers and vied for best on ground. Voss’s inspirational marks and Carr’s four goals were the highlights.

The final quarter was one of the most enthralling of the year, with the lead swapping every few minutes as one pivotal moment was overshadowed by another.

Byron Pickett’s miraculous goal from outside the boundary line. Clark Keating’s two spectacular marks and goals. Jason Akermanis’s show-stopping sidestep and goal to give his side the lead with three minutes left. Roger James’ two missed shots in the dying seconds to take his side from one point behind to one point in front. Seven lead changes in the quarter.

Shaun Burgoyne outpaced Mal Michael to mark and slot the first goal of the game, but it was the Lions who dominated attacking possession early on. Their lead could have been substantial but for some poor shots at goal.

Port Adelaide could not find space early, and found themselves chipping short too often.

Che Cockatoo Collins was introduced into the game in the second quarter and had an immediate impact. His two goals from tough angles gave Port the upper hand. Brad Scott succeeded in keeping quiet Port‘s premier ball runner, Nick Stevens, but there was plenty of support acts to help out, with Carr and James two of the standouts.

Daryl Wakelin was taken from the ground in the second term after twisting an ankle.

He had kept Alastair Lynch out of the game, the veteran’s only first-half goal coming from a free kick in the goal square.

Without Justin Leppitsch, the Lions’ defence had a noticeable hole. Chad Cornes took advantage of his match-up with fourth-gamer Luke Weller, outmarking him several times in the first half before Weller was taken off with a leg injury.

The under-strength Lions were then inspired by two pivotal incidents in the dying stages of the second quarter.

A 50-metre penalty to Michael Voss after Matthew Primus rode into his back with a knee resulted in a goal.

Then a desperate tackle by Jonathan Brown on Chad Cornes in the Lions’ forward pocket saw the ball spill loose. A free kick was awarded for holding the ball, but with advantage paid, Akermanis swooped, threading a trademark goal from an impossible angle.

That gave the Lions a one-point lead going in to the main break.

The Lions looked better whenever Akermanis was on the field. He responded to Carr’s third goal with a brilliant piece of roving to set up Hart to kick his second major. Akermanis was clearly still troubled by a hamstring complaint and rested more frequently as the game wore on.

He also set up Brown for a crucial goal late in the third term that brought the Lions back to within six points. His reflex handball to Hart in the final term resulted in another goal and a seven-point lead.

Brown gave one of his most impressive performances of the year, providing a reliable target at centre half-forward and running relentlessly to gather a mountain of touches.

Simon Black also made his presence felt in the third term after being well held by Kane Cornes.

It was a few flashes of brilliance in the end which got Port over the line. Roger James’ freakish left-foot snap from out of a pack in the third term silenced the crowd.

They were hushed even more shortly after when Byron Pickett ran clear of a pack, taking three bounces and booting a goal from inside 50 to give his side a 12-point lead.

That, together with James’ final-quarter heart-breaker were crucial in the end.

Much of the pre-game focus was on the showdown between two of the competition’s leading full-forwards.

But Lynch (two goals) and Warren Tredrea (no goals) were marked up too well to have a significant impact on the game.

The only people more devastated than the Lions were umpires Gavin Dore and Mark Turner, both of whom sustained ankle injuries and did not complete the game.

2 The number of points Port‘s Roger James kicked in the final couple of minutes of the game. They gave his side victory, bringing it from one point behind to one point in front.

The Gabba turf was cut shorter to limit the effect of dew on the grass. That ensured a typically hard, fast surface and improved players’ handling.

With 2:15 left on the clock in the second quarter, Michael Voss took a typically courageous mark on the wing. Matthew Primus lent a knee into his back while the Brisbane skipper was lying on the ground, resulting in a 50-metre penalty. Voss slotted the goal from 40 metres out and the Lions clawed back to within a goal after Port looked to be sneaking away.

Port Adelaide will need the extra day’s break when it journeys to the MCG next Sunday to take on a Hawthorn side hungry to sneak into the top eight. The Lions can rest at home and prepare for another Saturday night clash against the Kangaroos.