Match abandoned as the lights go out

AFL football was reduced to a farce last night when a major power blackout caused the abandonment of the St Kilda-Essendon match at Waverley. 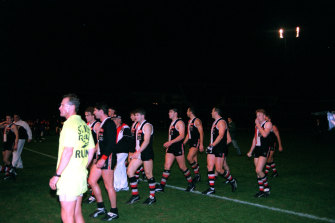 Players stand in the dark at Waverley Park.

The AFL’s chief executive, Ross Oakley, said a meeting of the league’s commission would be held as soon as possible to determine how to deal with the crisis. He said he was disappointed the match could not be completed, adding that AFL’s initial response was to attempt to satisfy the crowd at the game and to make sure the arena was secure. “Unfortunately, certain circumstances have occurred beyond our control.”

Oakley said he was not sure when the commission would be able to meet, because of the holiday weekend he was unsure where all seven commissioners were.

The match was officially abandoned at 10.15pm, 50 minutes after the power failure, believed to have been caused by a car accident. An emergency meeting of the AFL commission today or tomorrow will determine the result of the match. Both clubs believe they should be awarded four points from the match. 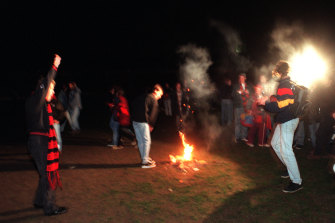 It was a dark hour when the lights went out in the Essendon – St Kilda matchCredit:The Age Archives

Last night is believed to be the first time since early this century that an AFL match was abandoned after the game had started.

But it was the public-safety issue that was causing the most immediate concern last night in what was a public relations disaster for the concept of a night grand final that the league has been pushing since last year.

After the game was abandoned, the league was forced to redeploy security guards to the outside of the ground to assist with crowd control. But because Waverley’s emergency power had also failed, there was no way of making an announcement to an increasingly agitated and restless crowd. Eventually, the crowd invaded the ground, starting a large bonfire of paper in the centre square. Other supporters destroyed two point posts at the Wellington Road end.

Extra police were brought in to assist with crowd control and, an hour after the game was called off, a police car combed the pitch black arena looking for signs of damage.

About the same time, league communications manager Tony Peek and other officials were held up in the ground manager’s office as a cluster of agitated fans demanded to see them, The AFL handed out tickets for a replacement game to fans as they left. 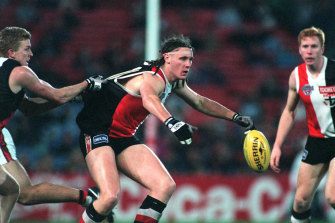 Peek, announcing the abandonment, said league officials had consulted the match umpires and officials of both clubs before announcing the decision. He said part of the confusion occurred because “there is nothing in the rules of the game which covers this sort of circumstance. We spoke about how long would be a realistic time for the players to be off the field before we could restart. Both clubs felt that 10.15pm would be the latest we could leave it,” Peek said. “Then it was going to take a whole lot longer to get the power back on here at the ground, so really there was no choice but to call the game off.”

St Kilda president Andrew Plympton said: “We would be happy with four premiership points and zero score. We wouldn’t want to alter the percentage.”

But Essendon captain Gary O’Donnell disagreed. “I believe we should get four premiership points each, but count the score to the stage when it was called off.”

O’Donnell said he would not be happy to replay the game.

“With the schedules clubs have between now and the finals, it would be too hard,“ Essendon coach Kevin Sheedy also agreed that both sides should receive four points, offering his regulation unique perspective on the situation. “We challenge the sport and the administration all the time, don’t we?” Sheedy said.

Oakley called the crowd’s invasion of the ground “pretty disgraceful” and admitted to feeling “a bit shell shocked” by the debacle. “I don’t think you could ever have a hard and fast rule about what has happened here tonight,” he said.

“From our point of view, we were working the way we should have.” Oakley rejected the suggestion that the debacle was a fatal blow to the league’s desire to play the grand final at night.

“If you draw that long bow, you would say that we shouldn’t have any night football ever again. Of course, that’s stupid, you would never consider that. I don’t think it has any impact at all.

“It’s the first time since we’ve had lights here that anything like this has occurred and it will be a long while, I dare say, (before) it will happen again.”