Even if Jake Friend decides to prematurely end his career due to concussions, he may not necessarily be lost to the Roosters.

Friend will sit down with medical staff and club powerbrokers on Tuesday to determine his future after suffering three concussions in the space of just six matches. A final decision hasn’t yet been reached, although some close to the Roosters hooker have concerns about his welfare. 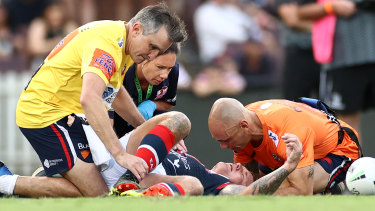 Roosters veteran Jake Friend was knocked out during round one of the season. Credit:Getty

Friend made the most of the opportunity. He has 268 NRL appearances for the Roosters, been a part of three premiership sides, captained the club and finally represented the Maroons last year.

After a spate of concussions in recent times, the NRL has committed to introducing an 18th player for teams to use in round five. While head office initially said the concussion substitute can only be activated if there are three concussions to any team, ARL Commission chairman Peter V’landys said there was flexibility to tweak the proposal.

“We’ve now consulted with the players, coaches and clubs and we’ll come up with something,” V’landys said. “We want the doctors to be more cautious … the players’ welfare comes first always.

“To be fair to the clubs, they are very aware of the concussion situation and they are all doing the right thing. It’s not that they are flaunting the rules, because I can assure you that they are not.”

During his pre-match press conference, Roosters coach Trent Robinson said he wanted the NRL to work more closely with clubs on concussion.

“I’d like the NRL to at least go hand-in-hand with what we’re trying to do. We get to see the players every day,” Robinson said. “Even clubs are all varied around the game and as soon as something happens with Boyd Cordner or Jake Friend everybody is wary about what we’re trying to do to exploit the salary cap.

“We don’t want this to happen, we want this to be the best possible thing for the Roosters and for the individual player.

“There’s so much paranoia around; whoever it is, they always think there is an ulterior motive other than trying to look after the player.”