An American multi-millionaire has held high-level talks with NRL officials about the prospect of taking a competition game to Utah.

The development comes as head office considers reintroducing the World Club Challenge (WCC), an event that would give Penrith the chance to earn the only piece of silverware missing from its collection.

The NRL has long held a desire to take a game to the United States. There is a renewed push to grow the sport in a new market, as well as capitalise on the explosion of legalised sports betting in the nation.

Powerbrokers at Rugby League Central will investigate the feasibility of taking the opening round of the 2023 season to America, which would mark the first time a competition game has been staged outside of Australia or New Zealand.

Several locations, including Los Angeles, have already been discussed as potential host cities and now there is a bold new bid to bring top-line rugby league content to the United States.

The Herald can reveal that US resident Paul Langi Kinikini has pitched for a game, whether it be next year’s season opener or another fixture, to be staged in Salt Lake City. Kinikini has outlined his vision to league powerbrokers including ARLC chairman Peter V’landys and NRL chief executive Andrew Abdo in a bid to turn the proposal a reality. 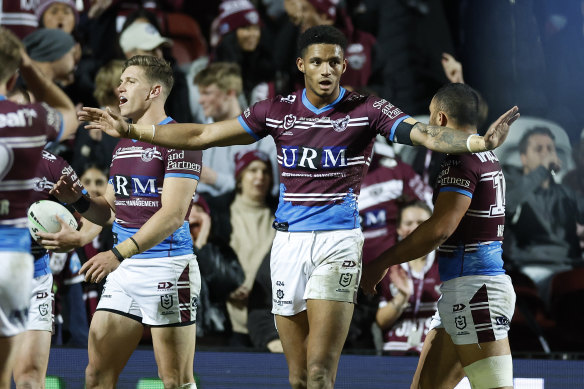 Manly could be coming to Utah.Credit:Getty Images

Sources with knowledge of the secret talks said they were productive and there was an appetite to continue the dialogue. However, Kinikini was tight-lipped when contacted for comment.

“I was there for meetings, they were very productive and we’re moving forward, but I’d prefer not to say anything at this point,” Kinikini told the Herald.

Utah has been put forward as the location because of its large Mormon and Polynesian populations. Given one in four US Tongans live in the “Beehive State”, there is a belief the collision contest will be well received by the locals.

It’s not the first time Kinikini has tried to bring top-level league to Salt Lake City; the businessman was keen to bring a Tonga-Samoa Test to the region two years ago.

Kinikini was so confident the event would be a success that he even offered to stump up a seven-figure guarantee to allay any concerns after the 2018 Denver Test between New Zealand and England was a financial disaster that initially left some players out of pocket.

The NRL, which is hoping to finalise its 2023 draw in coming weeks, wants any overseas foray to be cost-neutral.

Should a US game go ahead next year, Manly will be one of the teams to participate. South Sydney were poised to be their opponent, but the foundation club pulled out in the belief there wasn’t enough time to pull off the huge logistical task.

The decision robs the game of the spruiking power of South Sydney co-owner Russell Crowe, although Sea Eagles fan Hugh Jackman told the Herald in April: “Bring it on! Would love for it to happen. They would love the great game of rugby league here in the US I’m sure.”

Another big event for the international league calendar could also return early next year. The WCC – a traditional clash between the NRL and Super League champions – hasn’t been staged since 2020 due to the pandemic. However, there’s a chance that Penrith and St Helens could clash, most likely on Australian soil, for the mantle of the world’s best rugby league club.

Negotiations are being held between the respective leagues and Panthers coach Ivan Cleary, speaking in his post-match grand final press conference, said he was keen on the idea.

“For sure,” Cleary said. “You sit back and watch it in years gone by and think it’s something that everyone would always want to be part of. I’d be putting my hand up for it, for sure. Let’s go.”