Brad Fittler has left the door ajar for Latrell Mitchell to return to the State of Origin arena after selecting the out-of-favour Rooster for this month’s Blues camp.

Fittler sensationally dropped Mitchell after a substandard performance in the opening game of this year’s series, a bold call given the Taree product’s sizzling early-season form. The decision was justified when the Blues went on to win the series in Mitchell's absence, raising questions about his future at interstate level. 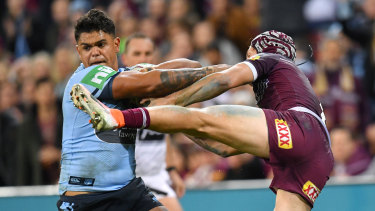 Latrell Mitchell will receive an invite to join the NSW inner sanctum.Credit:AAP

While the NSW hierarchy axed Mitchell amid concerns about his focus and attitude, they haven’t put a line through him altogether. The Herald can reveal Mitchell will be one of nine Roosters invited to participate in Blues or Emerging Blues camps held at the NSWRL centre of excellence over two days beginning on December 12.

While the draft squads were selected before the Herald revealed a Mitchell representative approached Rugby Australia about a possible cross-code switch – and the list still requires the approval of the NSWRL board – an invite is still expected to be extended to the star centre.

Roosters teammates Boyd Cordner, Angus Crichton, Luke Keary, Victor Radley and James Tedesco have been selected for the Blues camp on December 13, while fellow tricolours Nat Butcher, Kyle Flanagan and Sam Verrills have made the cut for the Emerging Blues gathering the previous day.

It is an unprecedented number of players chosen for the annual get-together from any one team and is a nod to the dominance of the premiers during the last two seasons.

However, it will be a difficult assignment for Mitchell to break back into Fittler’s side for Origin I given outside backs Ferguson, Kotoni Staggs, Nick Cotric, Josh Addo-Carr, Tom Trbojevic, James Roberts and Clint Gutherson have been chosen for the Blues camp, while Bronson Xerri, Rueben Garrick, Ryan Papenhuyzen, Curtis Scott and Campbell Graham have been picked for the Emerging camp.

Since coming into the NSW head coaching role, Fittler has maintained he isn’t inclined to pick players whose contractual matters are played out publicly, something that could count against Mitchell in his bid for a recall.

Mitchell’s future remains clouded even though he is contracted to the Roosters for 2020. The club is keen to offload him after pulling their two-year, $1.6 million contract extension from the table. Wests Tigers also withdrew their offer after feeling they were being used as a fallback option, with no other NRL clubs capable of accommodating him unless contract players are moved on.

The RA approach could be the first step towards a shock cross-code switch if Mitchell is considered a genuine Wallabies prospect.

Fittler, meanwhile, is trying to win three straight Origin series and the December camps present the first opportunity to work with his extended squad before the 2020 encounters against the Maroons.

While the Roosters dominate the top squad, the Eels are also well represented with five players – Ferguson, Gutherson, Ryan Matterson, Nathan Brown and Mitchell Moses – chosen for the catch-up.