Home » Rugby League » ‘Everyone’s been called out’: Why Parramatta ditched their leadership group

An overhaul of Parramatta’s team hierarchy and dissolving of the modern-day leadership group has been credited with driving the Eels to within 80 minutes of a long-desired grand final.

With a ‘now or never’ sentiment pervading a Parramatta roster that has been a finals fixture since 2017, coach Brad Arthur made the call to steer away from the NRL leadership norm of recent years over the summer.

Previously the Eels have been as vocal as any club in celebrating its leadership group, publishing behind-the-scenes footage of the ‘1, 2, 3, 4, 5’ voting format that saw Arthur’s squad decide their 2020 senior deputies.

But with 15 of Parramatta’s starting 17 named to take on the Cowboys boasting 80 or more games of NRL experience, Arthur took a different tack that spread leadership responsibilities further than ever before in his tenure.

“I’ve got a lot of senior players as it is and by having a leadership group, it felt like it capped some blokes that weren’t part of it.

“So we focus more on our senior players having responsibility and accountability for their own performances.

“We did it to encourage everyone to own this team – talk up when they need to. It’s not my team, it’s not Gutho’s team or Junior’s (co-captains Clint Gutherson and Junior Paulo). It’s every single player’s.

“If the senior guys play poorly, don’t do their job or don’t have the right attitude, that makes it very hard on the younger players to make a difference. 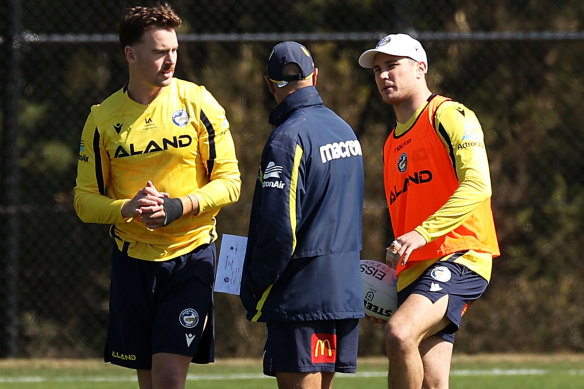 “Once you’re out on the field, the players are the ones that hold each other accountable.”

That accountability takes the form of a smaller, mano-a-mano meeting to begin each training week between “seven or eight senior players” before Parramatta’s wider team review.

Those players review solely each other’s performance, with no other players or Arthur’s team selections discussed.

It’s a process NSW Origin forward Ryan Matterson says began late last year during the pre-season. And one he sees as the biggest difference between this current Eels side and previous outfits that have stumbled so frustratingly two weeks into the finals.

“But if it means pulling someone up on an effort area then you don’t hold back anymore.

“I’ve been called out, I think everyone’s been called out. Especially during the pre-season. There was a big emphasis on making sure it was positive criticism and it would benefit the team.

“It feels like that’s where it started and it’s been working since.

“It could be punctuality, it could be wearing the right training gear, getting on a kick chase or an effort area, could be anything where if you feel like something needs to be called out, you say it.

“It doesn’t get silly either, everyone makes mistakes. It’s not about piling in on an individual, it’s about improving for your teammates.”