Parramatta have confirmed the signing of one of the NRL's hottest properties in Wests Tigers forward Ryan Matterson on a three-year deal. 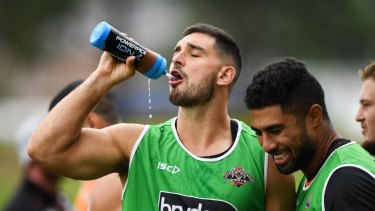 Ryan Matterson has officially returned to the Eels.Credit:NRL Photos

Matterson will join his former junior club for pre-season training later this month before donning the blue-and-gold from 2020.

The 25-year-old's 2019 performances in the Tigers' second row had him on the cusp of representative football, twice being named 18th man for the victorious NSW Blues by coach Brad Fittler.

Matterson was released by the Tigers last month following a turbulent end to the season under coach Michael Maguire.

The want-away forward was initially granted leave from training duties at Leichhardt and permission to look elsewhere.

Still with two years left on his contract, he drew criticism from former teammate Robbie Farah for not honouring his contract and going after bigger money.

Matterson was almost immediately linked to Parramatta, where he captained the Eels NYC team in 2014 and has family ties through his uncle Terry.

"It's always great to see the return of a local Parramatta Eels junior," coach Brad Arthur said on Thursday night.

"He'll have a whole pre-season with the team and I know he'll be an asset to our club next year."