A Mitch Duncan kick inside 50 is more often than not a thing of beauty.

It would make sense for Duncan to be underrated if he wasn't such a fine kick.

But why is Duncan underrated? 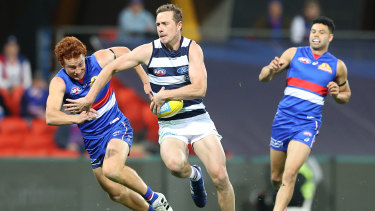 Mitch Duncan is the AFL’s best inside 50 kick, according to the stats. Credit:Getty Images

It's probable Geelong like it that way. Duncan himself certainly does.

"It's definitely not something that bugs me," Duncan said. "I have played with a lot of great players that have taken the spotlight, and rightly so.

In the past five seasons Geelong have retained possession from 57.9 per cent of Duncan's 297 inside 50s kicks.

"It comes back to decision making," Duncan said.

"Not trying to pick the hardest option every time helps and then having a forward like Hawk [Tom Hawkins] … who you trust and you've played with a long time. You can understand how they work and how he moves.

"Sometimes you put the ball in one spot and he does the rest."

"I'm not a contested ball player, really, I get the ball in a lot of time and space and feel like I can use my smarts and identify space and use work ethic to get there," he said. "So I have a bit of time to deliver it inside 50. It is a big part of my game and if I'm not kicking goals I love setting them up."

He says opposition pressure, tighter defensive systems and fatigue make the skill very hard to execute, but he rises above by "staying relaxed".

"I am not sure how it all kind of works but I like setting up goals, and kicking to full forwards is one of the best parts of the game I reckon," he said.

Those close to Duncan say he is extremely modest and diligent in his preparation. He says improving his consistency is a top priority.

"It's a long game so you do a lot of things wrong as well. It is a very imperfect game," Duncan said.

The 29-year-old won a premiership in his second year (2011) and at that point he thought more flags would flow as a matter of course.

"Then that doesn't happen and you build again and get really close and it has kind of never happened [again]," he said.

The Cats playing group has been working on staying calm under pressure this season, with hopes it will help avoid another near miss deep in the finals.

"It's just understanding the pressure of the game," Duncan said. "It is high pressure, things aren't going to go your way for periods of the game. And just being able to adapt and get the game back on your terms is the easy way to put it; Whether that's the mental side or method of your game style.

"When you intertwine both of those and get it back to a high standard then things are going to go your way.

"We have been in the situation so many times. It is very player-driven and we have help with the club psych doing a good job there."

Duncan had hip surgery in the off-season and just made Geelong's round one side.

Then, the eight-week coronavirus layoff came, which he describes as "a little bit of a blessing" for his fitness and undoubtedly for Geelong's 2020 flag hopes.

"It [interrupted pre-season] was going to be hard to sustain over the whole year. In the layoff I got specific training in that we had to miss to get back to playing in round one," he said.