It’s difficult to think of a person who has had a more positive influence on Australian rules football in the past 20 years than Daisy Pearce.

As she turned 13, now 34-year-old Pearce thought her love affair with the game would end due to the prevailing “wisdom” at the time that girls didn’t play footy. 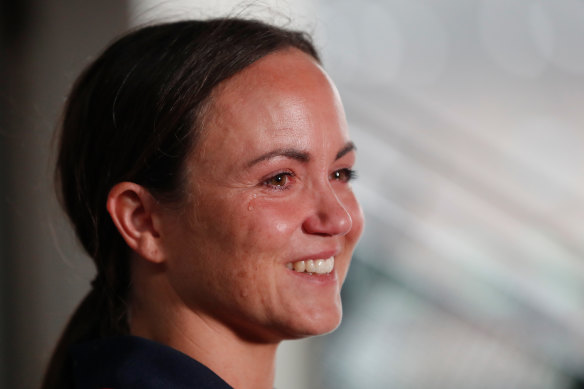 Daisy Pearce at her retirement announcement on Wednesday.Credit:AFL Photos

“I did not think I would touch footy again really, other than as a supporter,” Pearce said.

But she searched for a way to keep pulling on the boots and, thankfully, found a way to do so as she carved out a career within football. Pearce will not be lost to the game, as she will continue in coaching and commentary roles. But with her playing career coming to a close, we reflect on what makes her one of football’s most respected figures.

Pearce was not tall, particularly quick or brutal in the way she played, but she regularly stood out as the most complete player on the ground.

Her coach Mick Stinear realised that ability to read the play and adapt to the game situation was extraordinary. Pearce’s strong hands and bullish attack on the ball were one thing but when the game was on the line, it was Pearce, he noted, who stood up, making sure she was in the right position at the right time. 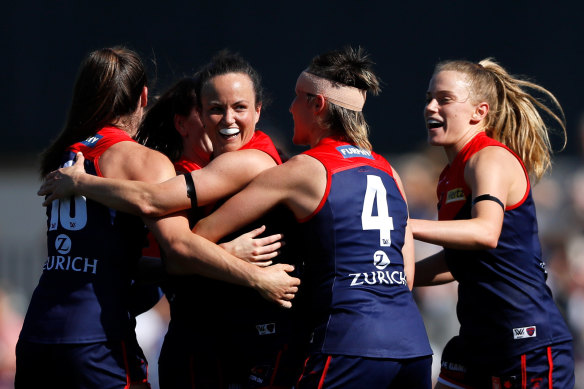 Her match-sealing goal at the end of this year’s preliminary final when she crumbed a loose ball and snapped accurately was the most recent example of this trait. But when Stinear is asked for a memorable moment he struggles, and her execution of the basics comes to mind first.

Those watching saw it too, as the game steadied when Pearce entered its sometimes chaotic rhythm and calmly made a good decision.

“Her ability to take a strong mark in the middle of the ground when required was exceptional,” Stinear said.

She won three Melbourne best and fairests, was a three-time All-Australian and won seven league best and fairests at Darebin, where she played almost an entire career’s worth of games in the VFLW, before joining Melbourne for their inaugural AFLW season in 2017.

Through her commentary, the public soon came to appreciate Pearce’s rare ability to analyse and articulate as much as Stinear and her teammates did.

There were some public figures who reacted poorly to Pearce’s commentary, but to most she was a welcome and well overdue breath of fresh air. Pearce, who will continue in her role for Seven in 2023, connects a viewer to what is happening on the TV as well as she connects a teammate to the game plan or a forward to her deft right-foot kicks. 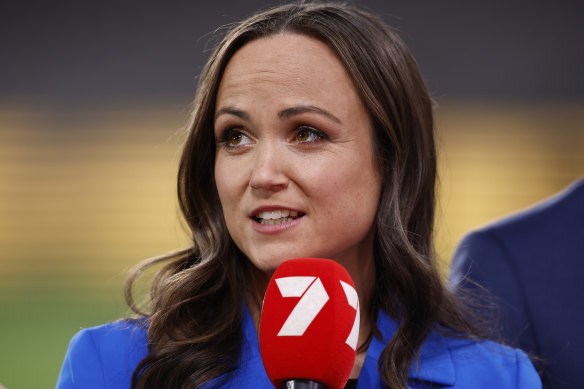 Pearce in her commentary role for Seven.Credit:Getty Images

Her down-to-earth nature combined with knowledge showed people watching the game the respect many yearned. And she was an unwilling but comfortable public figure, able to remain herself when the cameras were on and off. Her teammate at Darebin and Melbourne, Karen Paxman, said the rapid rise in fame did not seem to unsettle her.

“She just took it in her stride,” Paxman said.

Pearce’s experience and resilience shone a light for many on what it takes for an elite female athlete to carve out a career in her chosen sport. Articulate, often self-deprecating, always illuminating, Pearce seemed to hit the right note, regardless of how complex the issue she was being asked to sing about. She neither shirked nor shouted when her opinion on Indigenous issues, gender diversity or fair pay for AFLW was sought.

Without carrying any notion the game would make her a living, Pearce became the best she could be anyway, away from the spotlight with only the love of the game, competition and teammates to drive her through winter after winter.

Pearce’s best was the best. The teenager from country Victoria with a shy smile and a fierce competitiveness won seven league best and fairests, played in 10 premierships and was captain for seven of them – all before her AFLW career began at 28. 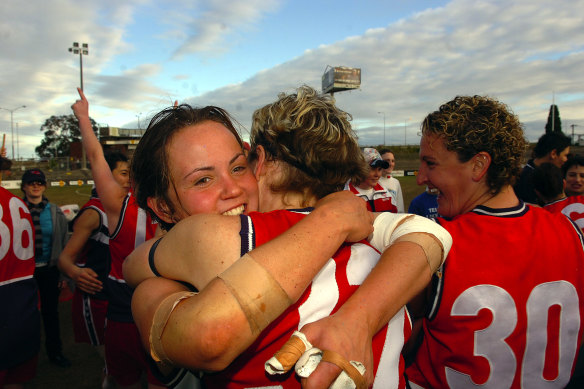 As the likes of Luke Hodge and Joel Selwood made their names, Pearce laboured away too as a midwife, gun footballer and inspirational leader.

But then Melbourne stumbled, unable to win the flag despite their talent. Then she spent a year away from the game to have twins. She returned, the first person in the competition to do so after giving birth.

Then she played forward, then back. Then she tried to manage twins during COVID-19 as the schedule kept shifting and AFLW players shouldered careers, families and footy without much recompense compared to the men. 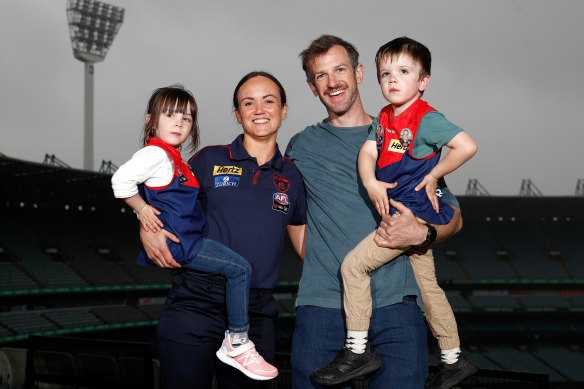 There was no crap with Daisy. And did she complain? Not on your life. And now she can add “AFLW premiership captain” to her resume.

Pearce was captain for seven of the 10 premierships she played with Darebin. She was named AFLW’s best captain four times.

It’s why her teammates, such as midfield protégé Lily Mithen, were trying to hide tears as they watched their friend announce her retirement from playing and her march into another challenge, as an assistant coach at Geelong. Mithen knew what she would miss, the Cats would come to love. 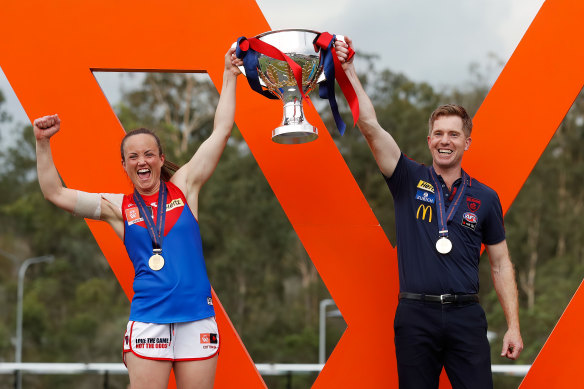 Premiership skipper: Daisy had plenty of experience on the podium by the time she lifted Melbourne’s first AFLW premiership cup.Credit:Getty Images

CREATING OPPORTUNITIES FOR OTHERS

As a role model for people wanting to play Australian rules football, few are better.

Pearce said being able to see little girls around town decked out in their footy gear after playing that day and that now being a normal part of Australian life was “the most rewarding thing from my whole career”.

She had looked on from the outside for long enough to relate to those watching from afar, but quickly won the respect of those inside the game for her humility, which mixed in nicely with her enormous drive.

On Wednesday, she found the space to acknowledge pioneers of women’s footy that she followed and the importance of her family, which is central to her life, and her need, like everyone, to be part of a community where they can be their true self.

Pearce loved the game, but she loved other parts of life too. She showed what having balance in life looked like.

Pearce has retired from playing having already left an important legacy to the game. She will move into coaching at Geelong with all the attributes needed for success.