De Belin will remain sidelined indefinitely while awaiting the outcome of his criminal case after Justice Melissa Perry on Friday ruled the governing body’s "no-fault" stand-down policy was an appropriate step to protect the game. The decision leaves a huge void for the Dragons, who could be without their representative lock for up to two years while awaiting the criminal matter to be finalised. 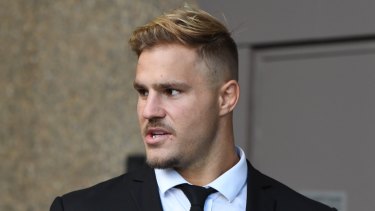 De Belin has the right to appeal to the Full Federal Court if an error of law was made in the initial judgment. But after already being saddled with a large legal bill – Perry ordered him to pay costs – it is unlikely he will risk incurring further fees.

Under the new protocols, affected teams can apply for a salary cap exemption to replace a player who has been stood down. Following the de Belin verdict, the Red V will now explore contingency options to strengthen their roster. However, they want Rugby League Central to foot the bill for a replacement.

“We’d like to open dialogue with them, that’s a conversation we’d like to have with them for sure,” Gordon told The Sun-Herald.

“Otherwise we’re just copping a loss. It’s an artificial situation. It’s not like an injury where someone is gone for six months. That’s life, you can’t do anything about injuries. This isn’t just about the prospect of losing someone for the season, but losing them for 18 months or two years.

ARLC chairman Peter Beattie rang Gordon shortly after Friday’s verdict in a bid to ease any tension between the parties. Gordon said he appreciated the gesture and used the opportunity to reiterate the club’s belief that the NRL should stump up the cash for de Belin’s replacement.

“He called me and said he wanted to work together and I said ‘absolutely’, that’s certainly the view of the club,” Gordon said.

“We want to sit down and talk to them to see what they can do on the financial side to provide a bit of relief. He acknowledged that.”

Beattie said the issue of who will foot the bill would ultimately be a question for NRL CEO Todd Greenberg and his management team.

“We’d have to have a look at it,” Beattie said.

“[Gordon] did mention it to me and at the end of the day we would have to consider that.

“We will see what the Dragons have to say. That’s a matter for Todd and he will have a look at that and come back to us.”

The Federal Court decision is likely to placate a raft of NRL sponsors who were concerned about the brand damage their firms were suffering due to their association with the game during the so-called ‘summer of hell’. De Belin has pleaded not guilty to charges of aggravated sexual assault, one of several off-field incidents that created negative headlines during the off-season.

“The nature of the charges against Mr de Belin and those of a sexual and violent nature laid against other players in that period were antithetical to the values of inclusiveness and respect, including the priority given to growing the number of female participants and fans, and preventing violence and disrespect towards women,” Perry stated in her judgement.

“… It is also reasonable to infer that permitting Mr de Belin and others subject to similar charges to continue to play may deter women from choosing to play rugby league and mothers (and equally, I would infer, fathers) from deciding that their children should play rugby league.”