Western Bulldogs coach Luke Beveridge was relieved a line-ball goal umpiring decision went his team's way late against the Eagles to keep them in the fight for a top eight spot, as West Coast sweats on scans on Jeremy McGovern's thumb before playing St Kilda on Thursday night.

The Bulldogs’ narrow victory did not lift them into the eight but the result gives them a chance of securing the 10 wins required for a finals berth, with games against Hawthorn and Fremantle remaining.

Despite dominating the match from quarter time the Bulldogs were still trailing with less than five minutes remaining when their skipper Marcus Bontempelli kicked a long goal that was touched just over the line by McGovern. 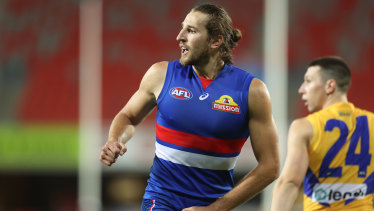 Scent of victory: Marcus Bontempelli keeps the Dogs in the hunt with a goal against the Eagles.Credit:Getty Images

Although they have 10 wins the coach does not feel as though they have secured a top eight spot with their remaining games against St Kilda and North Melbourne. If they want to give themselves the best chance of hosting a home final in week one they will need to beat the Saints.

Simpson said Mark Hutchings would be out after being sidelined during the game with another hamstring injury while McGovern hurt his thumb when the Bulldogs' Josh Bruce outmarked him early in the final quarter.

Simpson said it was the same thumb the marking defender broke earlier in the season and he would be sent for scans to determine the damage.

The coach would not be drawn on whether he would be able to keep playing, however he admitted it would be difficult if McGovern had broken it again. 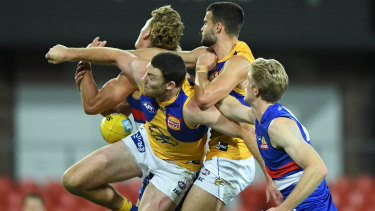 In the thick of it: Jeremy McGovern (front left) attempts a spoil during the Eagles narrow loss to the Bulldogs.Credit:Getty Images

"He has played with so much pain and resilience over the years. If anyone can, he can," Simpson said.

In better news for Eagles fans champion ruckman Nic Naitanui was expected to play against the Saints after withdrawing from the match against the Bulldogs because of a sore back. Simpson said with the compressed run of games it would have been reckless to play Naitanui.

St Kilda are in the eight but have matches remaining against West Coast and the Giants.