Melbourne have established themselves as one of the AFLW premiership favourites after dismantling the Western Bulldogs by 20 points at the Whitten Oval. 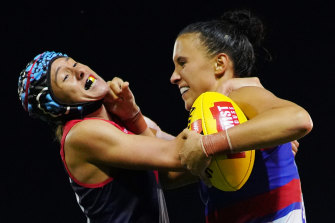 On a wet, muggy Friday night, the Demons' run, ferocious attack on the ball and ability to dominate time inside 50 proved pivotal in a 4.8 (32) to 2.0 (12) victory before 3133 supporters, which sets up their season. The Bulldogs' final score was their lowest in more than three seasons of the competition.

However, the Demons' victory may have been soured by another serious knee injury to Ainslie Kemp in the final 10 seconds of the match.

That the home-and-away campaign is only eight rounds means an undefeated opening fortnight has the Demons primed to make the finals, for only the top three teams from each conference progress.

The Demons knew they had an advantage in pace over the tough-in-the-contest Bulldogs and were keen to move the ball quickly. They did that early, the Dogs lacking composure, and led by two goals at half-time.

The lead could very well have been more had the Demons converted several opportunities. They finished the night with a 34-15 advantage in inside-50s.

Star Bulldogs extractor Ellie Blackburn found plenty of the ball despite being tagged but could not spark the necessary outside run. The contest was in the balance until midway through the third term when the speed of young Demon Casey Sherriff, in only her second game, was telling in pouncing on a loose ball inside attacking 50 and converting to open up a 20-point break.

Former Demons co-captain Shelley Scott was lively up forward while Daisy Pearce was composed across half-back. 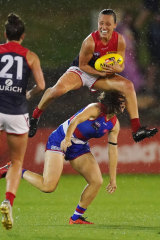 Whether it was a moment of miscommunication or a lack of understanding of the rules, Irish recruit Sinead Goldrick will certainly learn from not giving the ball to opponent Deanna Berry in the first term. The Dees defender looked to give the ball to the umpire, and not Berry, after a free kick was awarded on the Dogs' 50-metre line. The umpire had no option but to award a 50-metre penalty, gifting the Bulldogs their opening goal. It couldn't have come at a better time for the home side, for the Demons had two on the board. Goldrick didn't let the decision play on her mind, and her speed was invaluable. That goal proved to be the Dogs' last until late in the final term.

Whether it's men's or women's football, the role of an attacking half-back has never been more important. And in Pearce, the Demons have one of the best. Pearce has been eased back into football in a quarterback-type role after the birth of her twins but hasn't missed a beat. Dominant last week, she was again pivotal in repelling the Bulldogs' attack and giving her side a major advantage in inside-50s. Her eight touches to half-time all found an opponent.

Demons recruit Libby Birch found plenty of the ball upon her return to her former home ground. Birch was traded to the Demons after the 2019 campaign, and made an immediate splash last week. The defender was again busy but it was an interview on Channel Seven that may raise eyebrows at the Bulldogs, claiming she felt it was time to leave because there had been "cracks" in the playing group.