Melbourne's red and blue hearts are still beating but Greater Western Sydney's season is on the verge of ruin after the Giants' ruthless calls at selection failed to reignite their finals push.

Leon Cameron's decision to dump captain Stephen Coniglio led to a spike in the Giants' midfield but it was not enough to get the job done against the Demons, who prevailed in a game of numerous momentum swings by five points – 12.7 (79) to 11.8 (74). 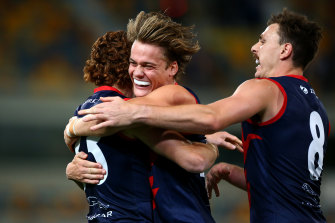 The win puts the Demons back in the eight – for now at least – though the Western Bulldogs can tip them out if they can defeat the lowly Hawthorn in Adelaide on Sunday.

Should that happen, not even a win next week over Essendon may be enough to get the Demons into just their second finals campaign since 2006.

As stirring as this victory was for the Dees, their hierarchy must wonder where this endeavour and application during their five-day swing in Cairns when they were outplayed by Sydney and Fremantle. Their finals berth could already have been sealed.

In a match befitting what was at stake, the two sides could not be accused of leaving anything out on the park. 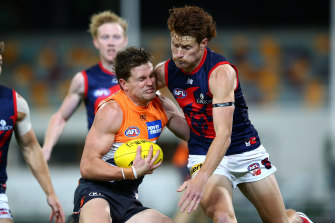 Both teams had periods where they were on top and threatening to take the game away but neither could put the other away.

Goal sneak Brent Daniels set up a grandstand finish after snapping truly to pull his side within a kick with 33 seconds left to play.

The Giants mounted one last forward thrust but could not get the ball close enough to the sticks to apply the supreme pressure on the Dees' defence.

Max Gawn was a clear winner in the ruck but the the Giants won the contested ball count.

The Giants have now lost control of their destiny. Even if they defeat St Kilda, they will need several other results to go their way if last year's runner-up are to make a fifth straight finals campaign.

Cameron may well be pleased with the response he got after making eight changes but it will be a hollow feeling given his team are now staring at a season without finals.

The Dees started with purpose, tackling and smothering the Giants, who were having enormous difficulty getting the ball out of their back half. So much so it was the the boundary umpire, whose job it is to shuttle the ball back to the centre, who was clearing the ball with the most effect.

The Demons can get drawn to the ball like bees to a honeytrap but they were disciplined in this regard, which allowed them to spread from the contest with more impact.

Smacked at the coalface last week, the Giants gained ascendancy in the clinches in the second but it was not until near half-time that it began to show on the scoreboard.