Key forward Joe Daniher will miss the rest of the season due to ongoing oestitis pubis problems, with surgery the most likely outcome.

Essendon and Daniher made a joint decision to sideline the 25-year-old after symptoms returned in recent weeks, with an operation to be confirmed after further consultation with specialists. 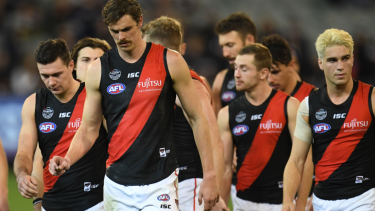 Out for the season: Joe Daniher.Credit:ninevms

"While it is incredibly disappointing to lose a player of Joe's calibre for the remainder of the season, the decision was made with the long term health and welfare of Joe as the utmost priority," Richardson said.

Disappointed at the outcome after undergoing a long rehabiliation process Daniher felt he had no other option with the star forward saying he felt like he had done everything possible to return in good shape.

"Clearly I want to be out there with my teammates, but with the key people involved in this process, we made the decision to go down this path, with surgery more than likely," Daniher said.

"I've felt like I have done everything I could to get back to this point, but with the relapse our options are now exhausted which is obviously disappointing."

Daniher will now have played just 11 games and kicked 15 goals in the past two seasons after winning the club best and fairest and kicking 65 goals while being named All-Australian in 2017 when the Bombers made the finals.

Essendon have had a shocking run with injuries to key players with last year's best and fairest Smith also sidelined for the rest of the season with a knee injury while speedy forward Orazio Fantasia has been out with a quad injury.

The club expects Daniher, who is out of contract at the end of 2020, to be available for the start of the pre-season.